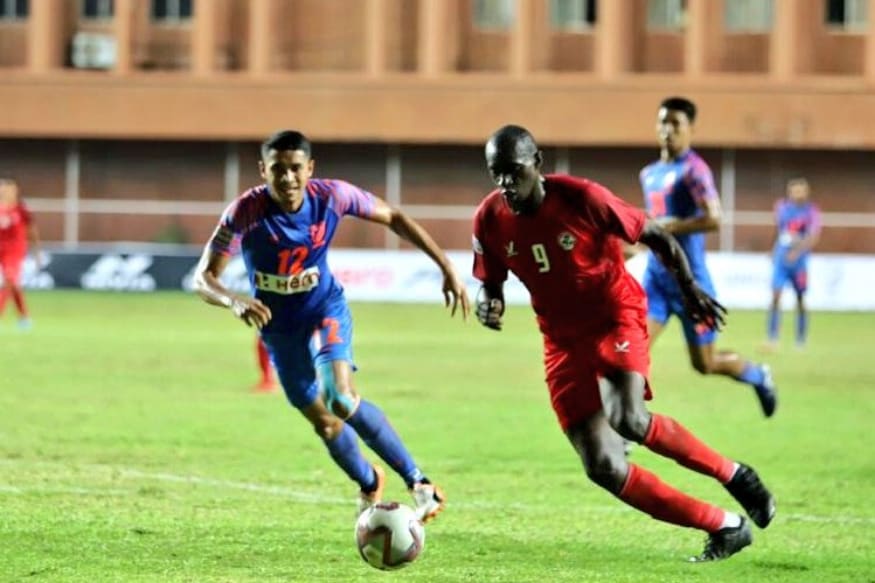 Vasco: Aizawl FC overcame a spirited young Indian Arrows 2-1 to register their first win of the 13th I-League season at the Tilak Maidan here on Monday.

The visitors from Mizoram rode on strikes from William Lalnunfela (64th minute) and Joe Zoherliana (90+4) to snatch a dramatic victory in the stoppage time after Vikram Partap Singh had equalised for the hosts in the 81st minute.

On a quest for their first win, both sides kicked-off the proceedings with an intent to press hard.

The young Arrows, in the initial minutes, exhibited neat passes and structured movement. Aizawl, on the other hand, displayed fine defensive solidarity, with Juuko Kassaga being a towering figure throughout the game, constantly frustrating the likes of Vikram and Harmanpreet.

In the 31st minute, a beautifully lobbed pass by Rochharzela was chested down by Abdoulaye Kanoute with exquisite control and the Malian forward had a crack on goal but was denied in spectacular fashion by Samik Mitra.

Minutes before the break, a miscued headed clearance by Ajin Tom fell to the feet of Kanoute but he squandered the golden opportunity to put Aizawl ahead, as his effort went wide off the mark.

In the second half, the Arrows nearly found an opening when Vikram was seemingly brought down by Kassaga inside the box, but referee Rosario Fernandes waved away all appeals for a penalty.

However, it was Aizawl who took the lead in the 64th minute. In an attempt to clear a cross from Isak Vanlalruatfela, Saurabh Meher deflected the delivery to the path of William Lalnunfela, and the substitute made no mistake tapping it in.

Venkatesh's side displayed great character and started dictating the tempo of the game. They were duly rewarded when a beautifully plotted run by Vikram led to him being through on goal and he made no mistake in earning a well-deserved equaliser for the Arrows.

However, all of Indian Arrows' good work was undone. With four minutes added on, Aizawl continued to overload the final third.

Lalnunfela broke through on the right inside the Arrows' box and delivered a measured cross which was met by a leaping Joe Zoherliana with his head, to seal a dramatic 2-1 win for Stanley Rozario's side.

With the victory, Aizawl move to third place in the Hero I-League table with four points while Indian Arrows remain at the bottom with two losses from as many games.

Arrows goalkeeper Samik Mitra was adjudged to be the Hero of the Match for his calm and confident display under the woodwork.