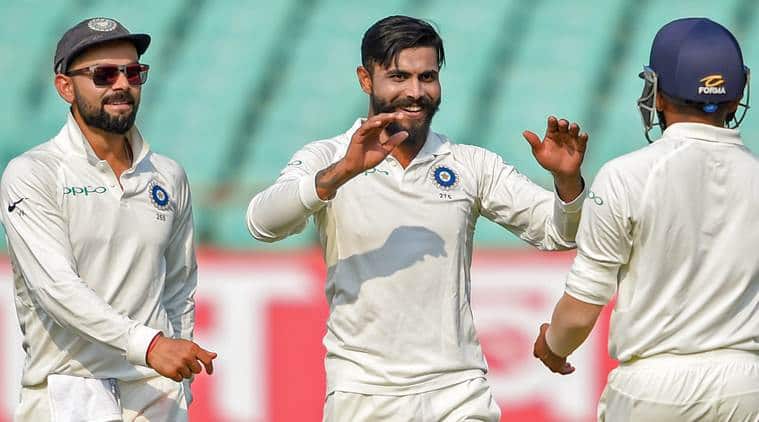 Five minutes before for the start of the Test, Ravindra Jadeja was spotted bowling near the boundary rope close to the dressing room. With an eye on the clock, a support staff member shouted: “Andar aaja, umpire bhi ground mein aa gaye!” Jadeja replied: “Ek aur over, baarish ne (practice) kharab kar diya.”

Nearly half an before that, the news was confirmed that he would be India’s lone spinner for the Test, and not Ravichandran Ashwin. The message was clear: Jadeja had pipped Ashwin as the chief spinner of the side.

However, the West Indies batsmen, though, might have been mighty delighted to not see their serial nemesis in India’s bowling line-up. It was an intriguing selection for Ashwin has a terrific record against the West Indies—against whom he had knocked out 60 wickets at 21 in 11 games.

The decision to leave the offie out couldn’t have been based on the batting skills either. Admitted that Jadeja has been in fine fettle with the bat—his last seven innings have seen two 80s and a maiden ton— while Ashwin’s batting performances have comparatively diminished.

But if stability to the batting order was a yardstick, Ashwin could have been a better choice. Anyway, the batting potential of a No 8 shouldn’t be a decisive factor. It’s understandable if India were playing in England or Australia, where it’s useful to have a resourceful lower order. But not so much, perhaps, in the West Indies.

It couldn’t have been the composition of West Indies’s batting line-up either—there are three right-handers and as many southpaws in the top-six. Of late, India have picked their spinners based on their left-hand or right-hand heaviness of their opponents. In a side with too many lefties, Ashwin would be the obvious choice. The West Indies line-up, in this regard, was split.

The only reason that went in Jadeja’s favour was probably continuity. The left-armer had played the last two of India’s Tests, in Melbourne and Sydney, chiefly because Ashwin was injured. He didn’t run through the opposition, expectedly so for a spinner in Australia. He was primarily tasked to choke the run-rate and he did it admirably. In Melbourne, he conceded only 45 runs in 25 overs, besides nabbing two wickets. In the second innings, he picked three before ending the series with another manful effort of 32-11-73-2. So there were no compelling reasons to pick Ashwin ahead of him.

Hanuma Vihari’s inclusion, too, might have played a minor role. Vihari, though not guileful as Ashwin, isn’t guileless either. He might not have too many variations as Ashwin, but he can dry up the runs with his flat off-break, and should the surface deteriorate and offer turn, he can spin the ball as well. On match eve, Kohli had reflected on his bowling prowess: “In Australia, he bowled well whenever he had asked to. He’s someone who gives more than 100 per cent when he’s entrusted with a job.”

The captain might have been referring to his shifts in Perth, where India had chosen four seamers and no spinner. So Vihari ended up bowling 14 overs each in both innings, and in the first took the wickets of Marcus Harris and Shaun Marsh, both left-handers. Thus his utility might have forced Jadeja’s case. So he could be something of an auxiliary spinner. To ally a proper, left-arm spinner, a decent off-spinner will suffice, the selectors might have thought.