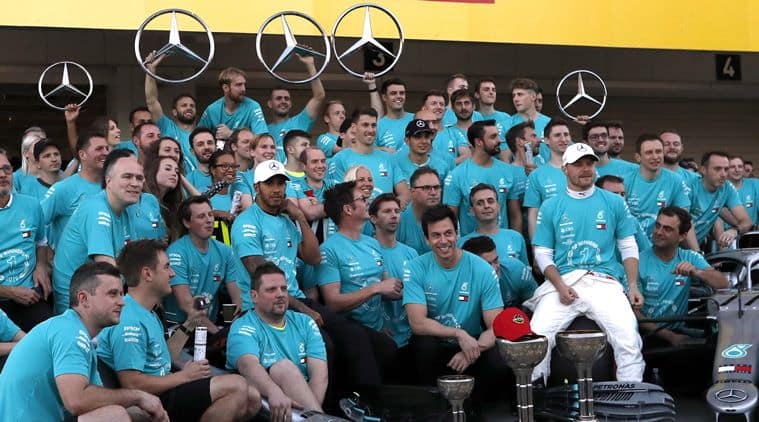 Valtteri Bottas’s win in Suzuka left the Finn as the only driver able to deny team mate Lewis Hamilton a sixth title and meant Mercedes became the first team to win the championship double for six years in a row.

“Niki would have said congratulations for the sixth ones, you have a problem for next year,” Wolff told Sky Sports television.

“We want to dedicate this to Niki because he has been such an important part from the beginning of the journey and his sheer presence was always so important in the mixture between support and pressure. He was just a very special person.

“I miss him every day and I think about him every day…he was a larger than life person and I say to myself what would he say and what would he think? But it doesn’t compensate for the loss, he’s simply not here anymore,” added the Austrian.

Lauda, a three-time world champion, died in May aged 70 after a lung transplant last year.

Hamilton, third on Sunday, leads Bottas by 64 points with four races — worth a maximum 104 points — remaining and has his first chance of securing the drivers’ title in Mexico in two weeks’ time.

Wolff said doing the double again was an overwhelming feeling.

“When we embarked on the journey six or seven years ago, we wanted to win races more regularly and then fight for championships and then six years later it’s the sixth championship in a row,” he said.

“I feel so happy for everybody that was involved. Lots of hard work behind the scenes, lots of painful moments also, but the team was always able to pick themselves up.

“I think this team has become so strong because we have really been able to stand up when it didn’t go well, like this morning (in qualifying). And that is something we need to continue to work on.”

Ferrari have started the last five races on pole position, with Japanese Grand Prix qualifying completed only three hours before the race after being delayed to Sunday morning because of Typhoon Hagibis.

“Qualifying came, and we weren’t quick enough like the last few races and disappointed, and now we win a race and win both championships,” said Wolff.

The team principal said Mercedes would not be easing up in the remaining races.

“There is a saying that a good horse only jumps as high as it needs to jump. But that is not the case with us,” he declared.

“The regulations stay the same (in 2020) and therefore learning on this year’s car is as important for next year as developing a new one…we are just not quick enough on a single lap against the Ferrari and we need to tackle that and we will.”