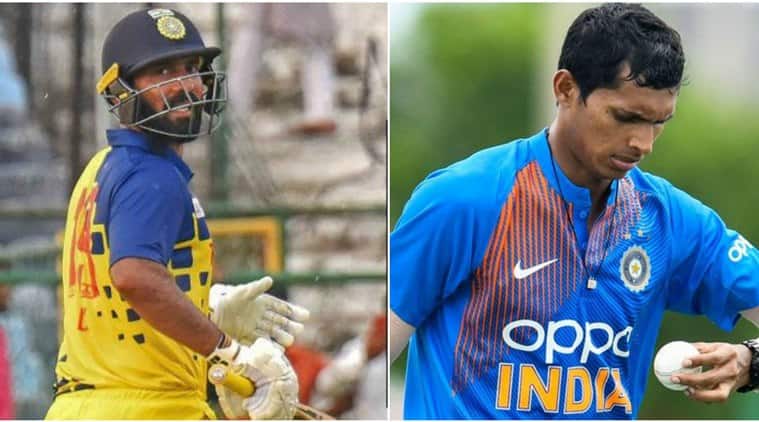 Skipper Dinesh Karthik led from the front as Tamil Nadu thrashed Services by a massive 212 runs in their Elite Group C game of the Vijay Hazare Trophy on Wednesday.

This is Tamil Nadu’s second successive win after they had opened their campaign by defeating Rajasthan on Tuesday.

Put into bat at the Sawai Mansingh Stadium, Tamil Nadu posted a healthy 294/8 with Karthik top-scoring with 95.

And later, their bowlers produced a splendid show to bundle out Services for a paltry 82. This is Tamil Nadu’s biggest win in List A cricket.

Karthik was ably supported by C Hari Nishaanath (73 off 71 balls) as the two rebuilt the Tamil Nadu innings after they were tottering at 55-4.

India pacer Navdeep Saini helped Delhi bundle out Haryana for 154 but rain forced them to share points for the second day in a row in the Vijay Hazare Trophy here on Wednesday.

While no play was possible in all three games of Group B here on Tuesday, rain played spoilsport soon after Delhi dismissed Haryana in 32.4 overs with Saini taking four wickets for 36 runs in 6.4 overs.

Delhi could bat only for 1.3 overs before rain arrived at the Darshanam Sports and Education Academy Cricket Ground. Both teams shared two points each for the abandoned game.

Haryana had India leggie Yuzvendra Chahal in the playing eleven and Delhi had Rishabh Pant, who has copped criticism of late for his reckless strokemaking in India colours.

Rishabh would be aiming to get some runs under his belt ahead of the Test series against South Africa starting October 2 in Visakhapatnam.

The games between Baroda and Uttar Pradesh, and Himachal Pradesh and Punjab too were abandoned.

Young opener Shubman Gill, who has been picked for the South Africa series, made 23 as Punjab struggled to 169 for nine in 42 overs.

In response, Himachal were 22 for one in eight overs before rain stopped play.

At the Reliance Stadium, Baroda were reeling at 91 for eight against Uttar Pradesh before play was called off.

Defending champions Mumbai have had a wet start to their Vijay Hazare trophy campaign, after their second game against Jharkhand was also abandoned due to inclement weather here on Wednesday.

Mumbai’s first game against Saurashtra in the Elite Group A of the national ODI championship was abandoned due to rains without a single ball being bowled.

Likewise, the two other Group A games — Kerala versus Chhattisgarh and Hyderabad versus Goa — were also abandoned due to inclement weather. Both these games were to be played in Alur on the outskirts of the city.