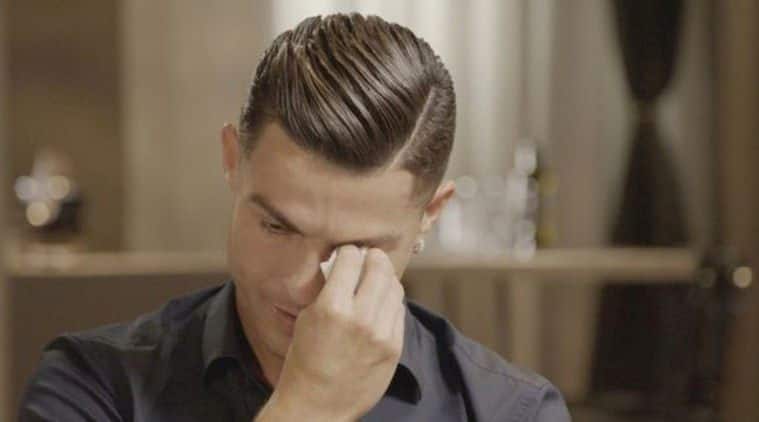 Cristiano Ronaldo broke down in tears after he was shown a rare footage of his late father which he had never seen before. During an hour-long interaction with English journalist Piers Morgan, the Juventus star was shown a film of his Jose Dinis Aveiro.

Ronaldo was just 20 when his father died of liver failure at the age of 52 after battling alcoholism. He had only spent a few months in Manchester when his father passed away.

Seeing his dad, Ronaldo could not supress his emotions and brokedown.

In the video, Cristiano’s father spoke about how proud he is of his son. After watching it, an emotional Ronaldo explained how he misses his dad while stating that he was not present to witness him conquering great heights in the game.

‘He doesn’t see me receive awards.’

In an emotional interview, @Cristiano breaks down in tears over the loss of his late father and the fact that he never got to witness his son’s success.

Watch the full interview on @ITV on Tuesday at 9pm.@piersmorgan | #GMB pic.twitter.com/LybbJn31VR

When asked how it feels to listen to his father taking pride in his son, Ronaldo said, ” Yes, a lot. I think the interview would be funny, but I didn’t expect to cry. But I never saw these images. I don’t know where you… I have to have these images to show my family.”

“But I really don’t know my father 100 percent. He was a drunk person. I never spoke with him, like a normal conversation. It was hard,” he added.

Since moving to Spain and now Italy, Ronaldo has helped his side lift five Champions League titles. Despite missing the final against France at Euro 2016, the 34-year-old was an integral part of the Portugal side that went on to win the competition.

Ronaldo, who is a father of four also stated: “My family sees, my mum, my brothers, even my old son, but my father, he didn’t see nothing, and it was… he died young.”

He further revealed his plans to marry his girlfriend Georgina Rodriguez in the future. “We’ll be [married] one day, for sure. It’s my mum’s dream as well. So, one day. Why not?”