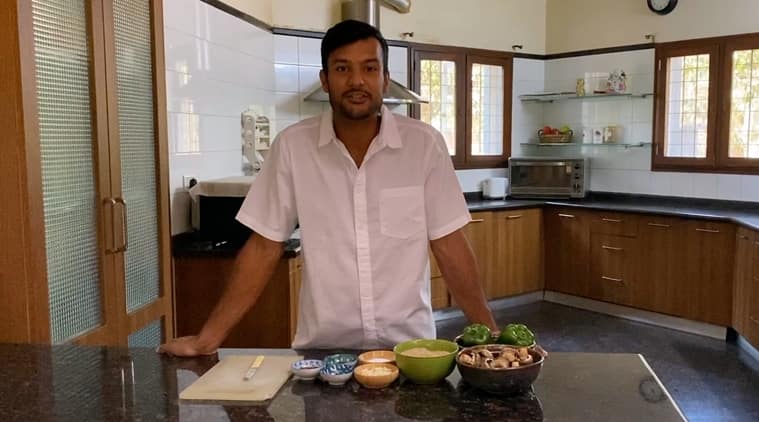 With sports taking a backseat due to the steep rise in coronavirus cases around the world, cricketers have been left with no option but to stay put inside their homes and indulge in daily activities. India opener Mayank Agarwal is at the top of that list, who after giving fitness goals, has now taken to cooking.

In a short video tweeted by the BCCI, Agarwal can be seen making preparation of butter garlic mushroom and bell-peppers with quinoa.

He leads the viewer through the entire process, from chopping up mushrooms and capsicums to introducing them to the spices like garlic, salt, olive oil, red chili, and soya and prepares the dish in no time, whilst explaining each and every step.

Earlier the 28-year-old batsman had prepared a dish featuring quinoa. He had taken to Twitter himself then and caption the photos, “Came up with a healthier option for dinner. Spinach and Mushroom Quinoa courtesy Chef Mayank! #StayHomeStaySafe #StayAwareStaySafe”

On the other hand, Ravichandran Ashwin has been on the forefront urging citizens to support the lockdown for their own safety. The Indian off-spinner is currently spending quality time with his family and on Wednesday, he engaged in a YouTube interaction (Isolation Premier League) with cricket host Gaurav Kapoor.

In the video, Ashwin reveals how unverified information shared on WhatsApp has created a panic among his parents. He also mentioned that his father, who was not aware about the magnitude of the pandemic, has now locked himself in his home after the Prime Minister addressed the nation on the issue.

Apart from his parents, Ashwin also stated that he has mastered the art of sweeping and visiting the grocery store. Even collecting the essentials has been one of the daily tasks he enjoys the most.

Earlier last week, the spinner made a humorous reference to the Mankading uproar he had started in the IPL last year to warn people of the perils of stepping out of their houses at a time the country is in lockdown to combat the coronavirus outbreak.

Hahaha, somebody sent me this and told me it’s exactly been 1 year since this run out happened.

As the nation goes into a lockdown, this is a good reminder to my citizens.

“…Exactly been 1 year since this run out happened. As the nation goes into a lockdown, this is a good reminder to my citizens. Don’t wander out. Stay inside, stay safe,” Ashwin tweeted on Wednesday.