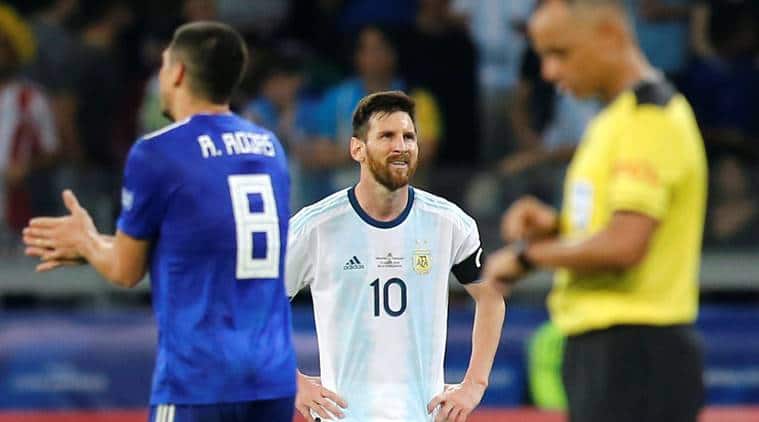 Lionel Messi returned to the Argentina side to continue chasing his dream of winning a trophy with his country at the Copa America, but with the team floundering under coach Lionel Scaloni, the experience is turning sour.

Messi’s second-half penalty salvaged a highly fortuitous 1-1 draw with Paraguay on Wednesday which kept Argentina in the competition and they must beat Qatar on Saturday to stand a chance of avoiding a humiliating group-stage exit.

With rookie coach Scaloni continuing to look ever more out of his depth with each game, however, a win over the Asian champions is far from guaranteed, and even if Argentina do earn a victory, they still need other results to go their way.

Against Paraguay, Scaloni made four changes to the team that had lost 2-0 to Colombia, axing high-profile players such as Angel di Maria and Sergio Aguero.

He quickly turned to Aguero with his side trailing 1-0 at halftime but just as Argentina were looking more dangerous after Messi’s equaliser and Franco Armani’s penalty save, he took off the lively Lautaro Martinez for Di Maria.

Messi, who has lost three Copa finals and missed a penalty in Argentina’s shootout defeat by Chile in 2016, did not hide his feelings as the prospect of his side’s earliest elimination from the Copa since 1983 edged closer.

“It’s very frustrating not to win, we’ve played twice and not won either game, that was not what we thought would happen. It would be crazy if we did not qualify,” he told reporters.

“What hurts the most is we are not functioning as a team, we need to keep searching to how to form the best team possible but there’s no time. Now we have one game left and the only hope we have left is to win it.”

A member of Jorge Sampaoli’s back-room staff, Scaloni was an uninspiring choice to become Argentina’s next coach when Sampaoli was sacked after the chaotic 2018 World Cup and his inexperience is showing at his first major tournament.

The 41-year-old experimented with more than 50 players in nine games before the Copa, including trying out eight goalkeepers.

Not all of Argentina’s problems lie with Scaloni, though, as he is the fourth coach to have taken charge since the 2014 World Cup and the national team set-up seems beset by short termism.

There are also problems in player development and emerging talent. To take one example, only four of Argentina’s starting 11 against Paraguay played in last season’s Champions League.