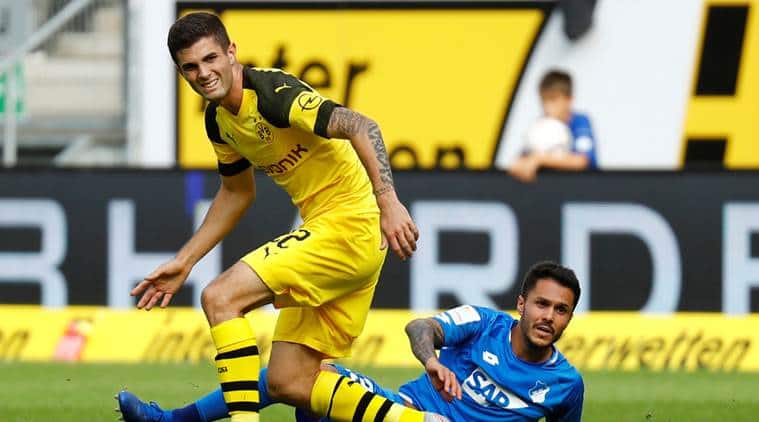 He did it again.

Christian Pulisic came to Borussia Dortmund’s rescue with a second goal in four days to salvage a 1-1 draw at Hoffenheim in the Bundesliga on Saturday.

The American midfielder, who scored Dortmund’s late winner on his 20th birthday at Club Brugge in the Champions League on Tuesday, saved the side from its first defeat of the season. He got in ahead of a defender to turn Marco Reus’ cross past Hoffenheim’s Oliver Baumann with six minutes remaining.

Dortmund’s defeat seemed all but certain after French defender Abdou Diallo was sent off in the 76th.

Pulisic was the team’s best player as it again struggled going forward. He had been out for around three weeks with muscular problems but returned on Tuesday as a substitute, and played the full game against Hoffenheim.

New coach Lucien Favre left midfielders Mario Goetze and Julian Weigl out of the squad. Goetze has yet to play in four Bundesliga games this season.

“That’s my decision and it’s purely a sporting one,” Favre said.

Dortmund had more of the ball but no efforts on goal in the first 45 minutes as Hoffenheim frustrated its efforts to get forward.

Dortmund improved in the second half but Diallo was shown red for bringing down Andrej Kramaric.

However, Pulisic was to score late for the second game in succession.

Bayern Munich produced another dominant display as it won at Schalke 2-0 to maintain its perfect start to the season and leave the home side considering its fourth defeat from four games.

James Rodriguez gave the visitors an early lead with a simple header from a poorly defended corner, and the Colombian star was involved again when Alessandro Schoepf brought him down for a penalty.

Robert Lewandowski duly converted for his third goal of the season.