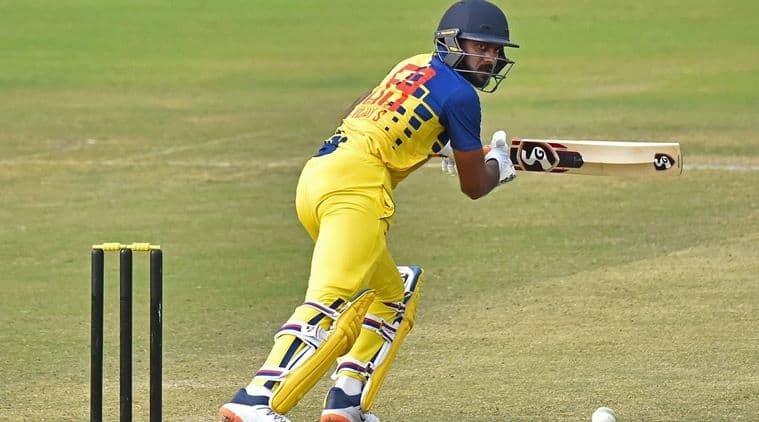 Baba Aparajith starred with an all-round performance, striking an unbeaten 111 (124 balls, 7 fours, 1 six) after taking 4 for 30 as Tamil Nadu thrashed Railways by eight wickets to notch up a seventh straight win in Group ‘C’ of the Vijay Hazare Trophy cricket tournament on Wednesday.

Tamil Nadu leads the group with 7 wins and 28 points and is almost certain to qualify for the knockout phase.

Gujarat is currently second with six wins from six matches and has three in hand.

Tamil Nadu’s chase did not get off to a great start as the in-form Abhinav Mukund fell for 11, caught and bowled by Ananta Saha while his opening partner Murali Vijay was run-out for 6.

However, Aparajith and Shankar dashed any hopes the Railways had of launching a fightback with a superb partnership, during which they played some attractive shots and rotated strike judiciously.

Aparajith has been in great form in the tournament and added a century to his four half-centuries.

The Railways captain Arindam Ghosh tried eight bowlers but not could make an impression on Aparajith and Shankar, who collected runs in a calm and impressive fashion, overhauling the taraget in the 45th over.

In other matches, Rajasthan defeated services for its first win while Bengal beat Tripura by five wickets.

Fast bowler Sidharth Kaul starred with the ball before Punjab put up an all-round batting effort to register a three-wicket win over Baroda in an Elite Group B match of the Vijay Hazare Trophy National One-Day tournament, here on Wednesday.

Put in to bat, Baroda rode on Vishnu Solanki’s half-century and Yusuf Pathan’s 43 to reach 222 for eight in the stipulated 50 overs.

Solanki, who came in one down, scored a 74-ball 54. His innings was laced with six boundaries and a maximum. He was trapped leg before by leg spinner Mayank Markande in the 25th over.

Former India all-rounder Pathan looked in explosive form, hitting three sixes and a four but could not guide Baroda to a big total as he was dismissed by Kaul with seven balls remaining.

Kaul returned with the figures of 4/58, Markande (2/31) scalped two wickets while skipper Gurkeerat Singh and Ramndeep Singh picked up a wicket each.

Sandeep Sharma, who had picked up a career-best seven for 19 against Haryana, remained wicketless.

Chasing 223, Punjab lost opener Abhijeet Garg for a duck in the second over. Captain Gurkeerat and Anmol Malhotra were the joint top scorers, both playing a 39-run innings each.

Abhishek Sharma (38), Sharad Lumba (33) also chipped in with the bat. Towards the end, Karan Kalia scored an unbeaten 35 to seal the victory for Punjab.

For Baroda Rish Arothe was the pick of the bowlers. He picked up three wickets giving away 47 runs.

This was Baroda’s fourth consecutive loss. They remain winless in tournament.

For Punjab, this was their third win from four matches. They have only lost to Haryana.