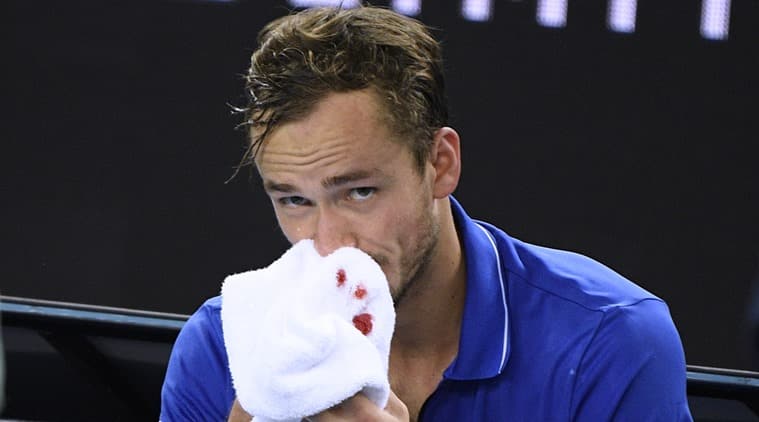 Daniil Medvedev holds a towel on his nosebleed during his second-round singles match (Source: AP)

Fourth seed Daniil Medvedev of Russia dealt with spells of resistance from Spanish qualifier Pedro Martinez and a bleeding nose on his way to a 7-5 6-1 6-3 win on Thursday to reach the third round of the Australian Open.

Medvedev, a U.S. Open finalist last year, arrived in Melbourne in red-hot form, winning all his singles matches at the inaugural ATP Cup before a three-set defeat to seven-time Australian Open champion Novak Djokovic in the semi-final.

After a hard-fought four-set win in the opening round against American Frances Tiafoe, who made the quarter-finals at Melbourne Park last year, Medvedev had a much easier outing against the 168th-ranked Martinez.

The World No.4 dispatches of Qualifier Pedro Martinez, 7-5 6-1 6-3 to advance to the third round for the second time at the #AusOpen.#AO2020 pic.twitter.com/vMpq9asdds

“I think there are still some things to improve. I think I could be more aggressive few moments of the match,” he told reporters.

What was more challenging for the Russian was probably a minor health scare as Medvedev’s nose started bleeding while he was up 5-0 in the second set. But he was back on court firing on all cylinders after a medical timeout.

“Let’s say it happens maybe two times a year or maybe once,” he said, adding it was not related to tension.

The 23-year-old was not happy with his serving against Tiafoe but was much more clinical in the department on Thursday, striking 19 aces against Martinez.

American great John McEnroe recently tipped Medvedev as the man most likely to break the three-year Grand Slam stranglehold of Djokovic, Rafa Nadal and Roger Federer in 2020 after a season featuring four titles and a Tour-leading 59 match wins.

The Russian showed exactly why, as 40 winners flowed off his racket – both from the forehand and the backhand side. One of them – in the third game of third set – brought the crowd, under the closed roof at the Margaret Court Arena, on their feet.

With Martinez coming up with a wide serve followed by a drop volley, Medvedev scampered to tip a return over the net but had to immediately run back to the baseline to get a lob back with his back towards his opponent.

Don’t forget you can donate too here: https://t.co/9RPgZ7cBoB#AO2020 | #AusOpen pic.twitter.com/PS9HSvKznS

Martinez did not do much wrong with his volley but Medvedev was still able to stretch enough to reach the ball and produced a double-handed backhand pass for one of the shots of the first week at Melbourne Park.

The Spaniard had never won a tour-level match before his Australian Open debut this week and could only break his opponent’s serve once while creating three more chances for a break in the sixth game of the third set.

He even tried an underarm serve at 2-2 in the third set but was not able to disturb the Russian’s momentum.

Next up for Medvedev will be a third round clash against Spaniard Jaume Munar or local hope Alexei Popyrin.