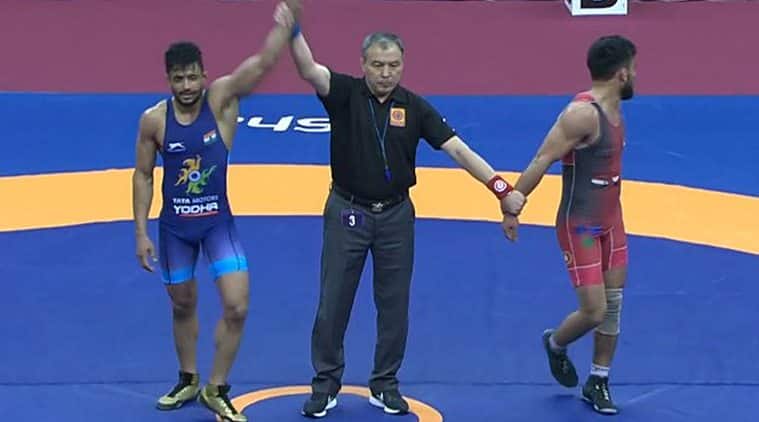 Three India Greco-Roman wrestlers settled for bronze medals on the second day of the Asian Wrestling Championships at the KD Jadhav Hall, Indira Gandhi Indoor Stadium. Ashu, Aditya and Hardeep had the consolation of a podium finish, after having missed in the opportunities for a shot at the more prestigious medal on on Wednesday.

Earlier India qualified for four Bronze medal bouts after losing out on a chance to seal a spot in any of the gold medal clashes. In the first of the four bronze medal matches, India’s Gyanender had to face disappointment as he lost out to Uzbekistan’s Islomjon Bakhramov 0-6 in the 60 KG weight category.

India’s second Bronze medal saw Ashu (67KG) earn a commanding 8-1 win over Syria’s Muhammad Alhasan which was the redemption of the loss that he faced in the semi-final, which he lost against the Uzbek Makhmud Bakhshilloev due to a technical win awarded to the latter.

“It feels great to earn a Bronze medal in my first ever senior championship. I lost my semi-final bout as I invested a lot of time on attacking, which I worked upon in this bout with more emphasis on defence. I am happy that things panned out as planned,” said an elated Ashu after his win.

India’s second Bronze medal came when 23-year old Aditya Kundu (72KG) wrapped up his bout in less than two minutes defeating Japanese wrestler Nao Kusaka 8-0. This was Aditya’s first Asian Championship and his second ever international tournament. Aditya who will now focus on his Olympics qualification will aim to reduce his weight to 67 KG to be able to compete at the Tokyo Olympics later this year.

“It feels good to have won the Bronze medal. I lost out on my gold medal match but I am happy I could play as per my strategy in this game and thereby win the bout,” said Aditya after his win.

Hardeep after his win said, “I was worried at one point when I was supposed to be on the ground as it is a weakness that I have been working upon. In the end, I was able to maintain my cool and hold the opponent off with a strong defensive strategy.”

India now has five medals that includes one Gold and four Bronze medals in the Asian Wrestling Championships 2020 in the Greco Roman category bettering their performance from the last Asian meet.

The tournament is being played at the KD Jadhav Indoor Wrestling Stadium from 18-23 February 2020.