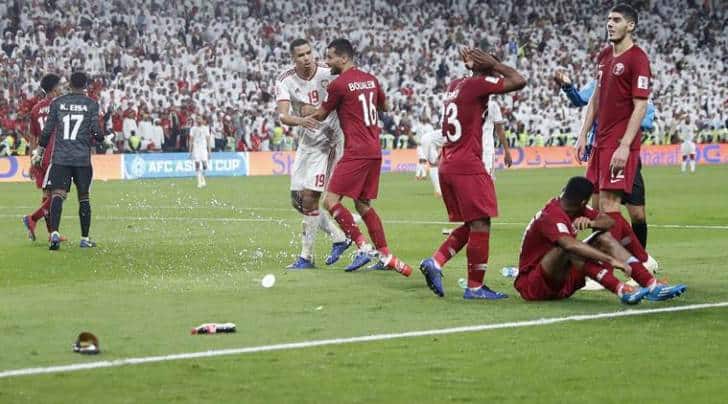 Qatar players dodged shoes thrown by some spectators after the second goal in a 4-0 rout at Mohammed bin Zayed Stadium on Jan. 29.

The politically charged game was played about 20 months into an ongoing economic and travel boycott of Qatar by hostile regional neighbors, including the UAE.

The Asian soccer body said UAE fans also “got into a fight among themselves after the match,” and one ran onto the field.

“The defendant had issues with ensuring the safety and security at the match as regards the distribution of beverages and the public passageways,” the AFC said.

The UAE was also ordered to play its first home qualifying game for the 2023 Asian Cup in an empty stadium.

The verdict was the latest legal defeat for the UAE soccer federation in fallout from the Qatar game.

On the day of Qatar’s win over Japan in the Asian Cup final, the AFC rejected a formal complaint by the UAE that two players were ineligible to play for the 2022 World Cup host nation’s team amid allegations of wrongfully submitted documents.

An appeal by the UAE against the decision is likely in a case that could go to the Court of Arbitration for Sport in Switzerland.

The disciplinary cases are playing out during the AFC presidential campaign, where two of the three candidates come from the UAE and Qatar.