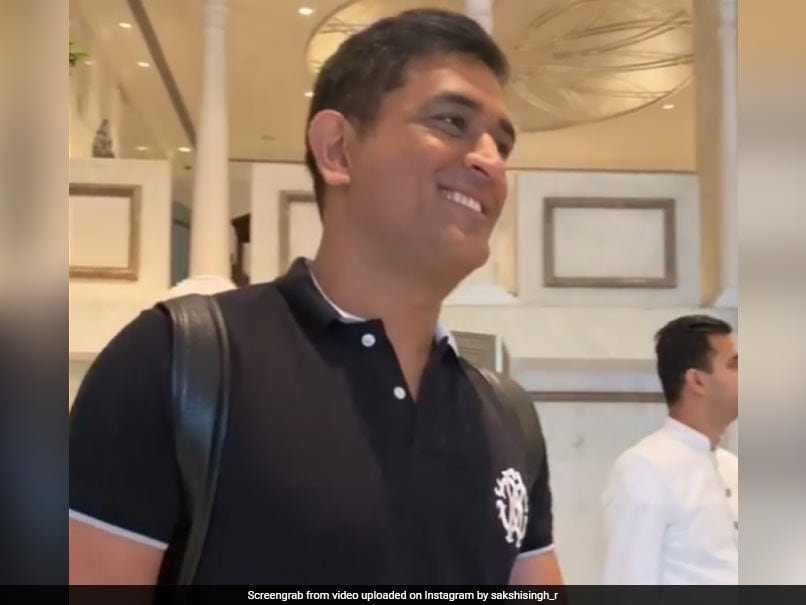 In a series of videos shared on Instagram by Sakshi Singh Dhoni captioned "#sweetieoftheday", she can be seen continuously teasing MS Dhoni as he completes formalities at the reception of a hotel. In the first video, MS Dhoni is seen bringing down their luggage when she starts calling him "Sweetie". "At least look at me," she says as he walks away before asking "why is my sweetie not looking at me?" She follows him to a counter where he is signing some papers while calling him "cutie of the day" and then goes on to ask a staff member standing with him "He's so cute, no?" The hotel staffer smiles and agrees before she asks him again.

In the next video, Dhoni is seen walking towards Sakshi and her friends when she says, "How cute are you looking," before asking him "Are you blushing?" as he struggles to hold back his smile.

"Can you do something to throw her out?" he cheekily asks her friends as they giggle.

Rishabh Pant was the first to join in on the fun on social media, commenting "Hello cutie". Tennis star Sania Mirza was also left in splits, as she reacted with laughing emojis. Sagarika Ghatge and Hazel Keech shared similar reactions on the videos.

The former India skipper has not played international cricket since India made a semi-final exit from the World Cup 2019 in July. However, he has kept social media abuzz with various appearances that are met with great enthusiasm from his huge fan base.

In another video that was shared on social media recently, MS Dhoni is seen joining singer Armaan Malik along with Sakshi as he sang a song from the former India captain's biopic "MS Dhoni: The Untold Story".