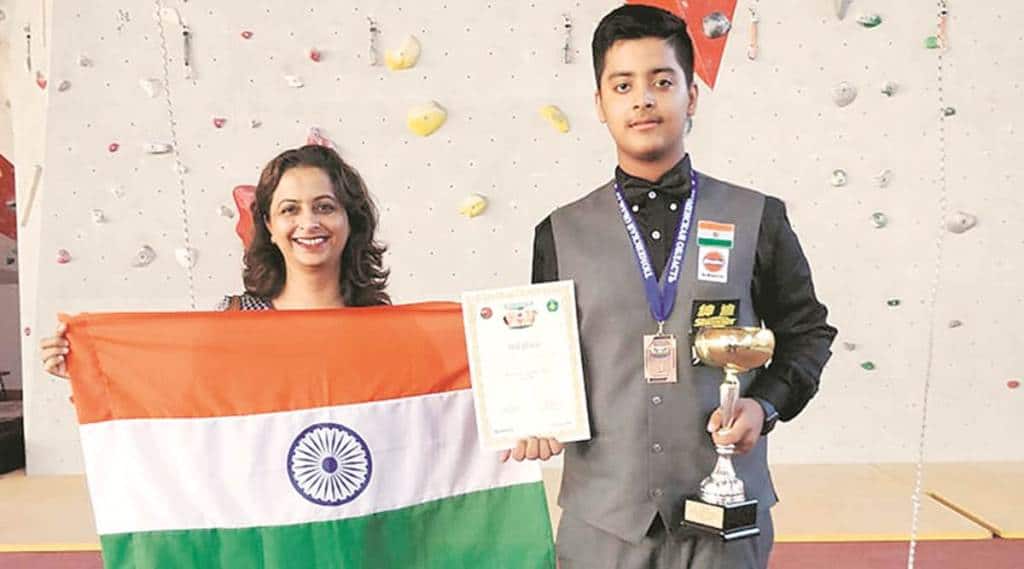 On Saturday evening, as 15-year-old Chandigarh lad Ranveer Duggal won the bronze medal in the IBSF World U-16 Snooker Championship in Tyumen, Russia, the youngster broke into tears and hugged his mother Jaswinder Kaur. More than four years ago, Ranveer had lost his father Sandeep Duggal, a former national champion, to an infection. Even though the Chandigarh player lost 1-4 to eventual champion Antoni Kowalski of Poland in the semi-finals, it was a first for any Chandigarh junior player to achieve the feat.

“It’s a huge moment for me and my family. My father always wanted to see me play for India and win a medal. When I won the medal on Saturday, I got emotional seeing my mother raise the Indian flag and we remembered my father. He had won national titles but never played in any international tournament. Had he been alive, it would have been the greatest moment for him. I am sure he would be watching me. I dedicate this medal to my father and family,” said Ranveer while talking to Chandigarh Newsline before boarding his return flight from Moscow Airport.

A student of IX standard at St Stephen’s School, Sector 45, Ranveer had become the youngest player at the age of six years to play in national pool championship in Ludhiana in 2011 before becoming the Chandigarh junior and sub-junior champion in 2015. In 2016, the youngster had become the Chandigarh U-18 and U-21champion before he reached the semi-finals in the U-18 Snooker Nationals in Pune in 2017. The same year saw Duggal reach the quarter-finals in the World U-16 Snooker Championship at St Petersburg, Russia. This year, Duggal reached the quarter-finals in the U-21 Billiards Nationals at Indore before playing in the World U-16 Snooker Championship.

Ranveer, who also trains under his grandfather Rakesh Duggal, had topped the group of five players losing only one frame in the league stage in Russia. In the pre-quarterfinals, the Chandigarh youngster scored a 3-0 win over Jack Newman of Ireland before scoring a 4-0 win over Leone Corwley of Ireland in the quarters.

“Adjusting to the weather in Russia was the key here. Even though the matches are played indoors, we spend rest of the time outdoors. Topping the league stage gave me confidence ahead of the knock-out stage and the win over the Irish players meant special. Reaching the quarter-finals in U-21 Billiards Nationals in Indore also boosted my confidence as it came in billiards category. My father was a friend of 21-time world champion Pankaj Advani and I met him during the national camp once. I took tips from him and he told me to focus on both billiards and snooker, Apart from my coach, I also train under my grandfather Rakesh Duggal and he always tells me about my father’s game,” said Ranveer, who is the current U-18 and U-21 Chandigarh champion and had also won the silver medal in senior category.

The youngster has been training under former national champion s Talwar for the last one year and the coach believes that the youngster will improve further. “Ranveer started playing at a young age and that’s his strength. To win a medal at the World U-16 level will boost his confidence. He did not give his opponents many chances before the semi-finals and he will take this as a positive. He has got good potting skills and he is not afraid of any player,” Talwar said.