Were Fake Fingers Manufactured to Cast Votes in Lok Sabha Elections? Here is a Fact Check An image of prosthetic fingers has been shared hundreds of times in social media posts that claim they were "made for casting votes" two days before voting started for 2019 Lok Sabha election. The claim is false; the pictures have been taken from 2013 articles about prosthetic fingers helping to reform former Yakuza in Japan.

The image, which consists of a collage of two photographs, was published in this Facebook post on April 9, 2019. 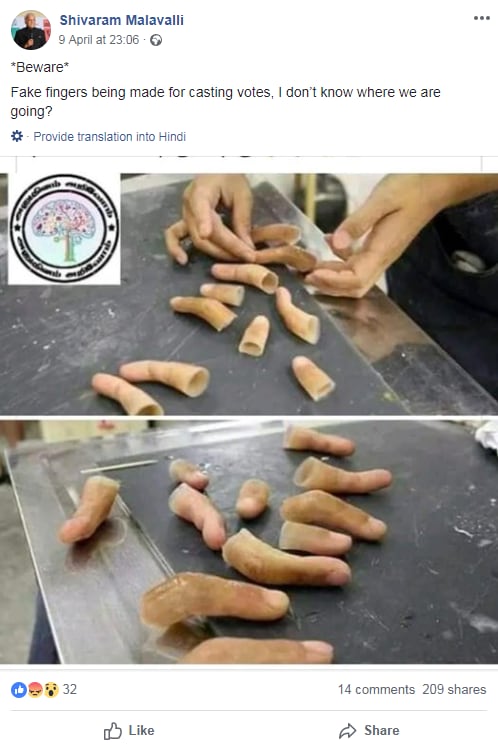 The caption states: "*Beware*. Fake fingers being made for casting votes, I don’t know where we are going?"

The Facebook account posted the image two days before voting began in the 2019 Lok Sabha elections on April 11, 2019. Here is an AFP report published on April 9, 2019, about the national polls.

But both the photos in the misleading Facebook post originated from 2013 reports about prosthetic fingers being manufactured in Japan.

A reverse image search on Yandex found the top photo in the misleading post was taken from the personal website of Japanese-American journalist Akiko Fujita. This is an archived version of her article published on December 16, 2013.

Below is a screenshot of the article which was posted to Facebook February 14, 2017: Snapshot of the news report

Another reverse image search on Yandex found an original photo which matched the bottom image in the misleading post published in this report by US-based news network Good Morning America on June 7, 2013.

Below is a screenshot of the report: Snapshot of the report

AFP published this article about the Japanese prosthetic fingers on June 13, 2013.

Below is the accompanying video report on AFP’s official YouTube channel.

Fact-check organisation Boom Live published this report about the image in the misleading social media posts.

It reported that the same image was shared by the former Chief Election Commissioner, Dr SY Quraishi, in a tweet on February 21, 2017, with a similar claim.