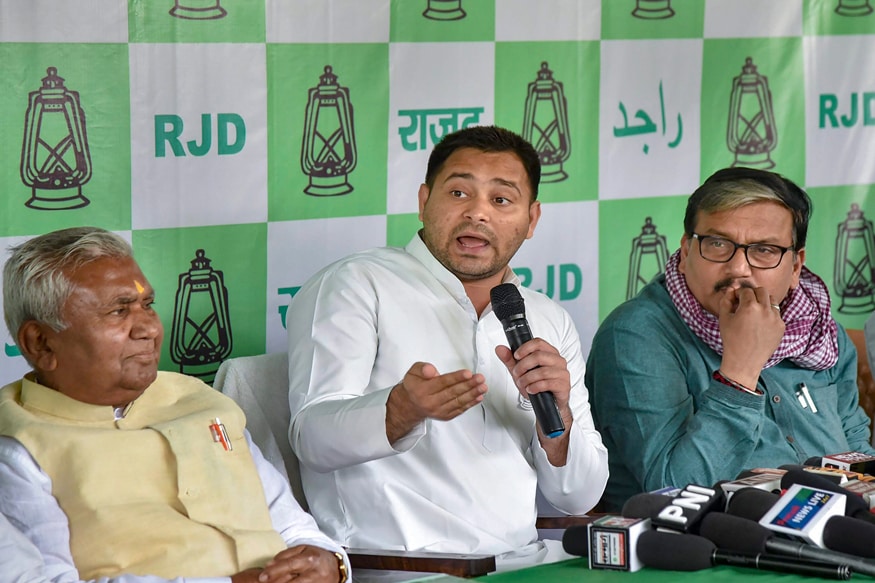 Patna: Senior RJD leader Tejashwi Prasad Yadav on Sunday trained his guns at JD(U) Rajya Sabha member Ram Chandra Prasad Singh as his daughter, who is an IPS officer, reportedly used for official work an MLC's car with an MP sticker pasted on it.

Alleging that people have to pay illegal levy to Ram Chandra Prasad (RCP) Singh to become members of legislative council (MLC), he said central agencies must take action against him.

However, the JD(U) claimed that the rule of law exists in Bihar now, while it was absent during the RJD rule.

RCP Singh's daughter Lipi Singh, who is additional superintendent of police in charge of Barh sub-division of Patna district, had gone to the Saket court in Delhi on Saturday to seek transit remand of controversial Mokama MLA Anant Singh in an Unlawful Activities (Prevention) Act case.

Reports then surfaced in the media here that the vehicle used by her to reach the court allegedly belonged to JD(U) MLC Ranveer Nandan. The car though belonging to a member of the state legislative council allegedly carried a sticker used by a member of Parliament.

"The said JD(U) MLC who provided his vehicle has become an MLC by paying the RCP tax. No one knows how many properties and vehicles owned by one person are actually being used by another," Tejashwi alleged.

By 'RCP tax', the leader of opposition in Bihar Assembly allegedly referred to illegal levy collected by the JD(U) leader.

RCP Singh, a former IAS officer of Uttar Pradesh cadre, is the JD(U) national general secretary and the party's leader in the Rajya Sabha. He is considered the second most powerful leader in JD(U) after Nitish Kumar.

"The incident shows that RCP Singh is distributing the MLC post by accepting money. This has proved the allegations of RCP tax being collected. Nothing moves without paying RCP tax," Tejashwi told reporters.

Talking to reporters here after an RJD's meeting, he claimed that Chief Minister Nitish Kumar, who is also JD(U) chief, likes people who collect money for his party.

Kumar and Deputy Chief Minister Sushil Kumar Modi should inform people what action has been taken in this matter, he said.

Tejashwi asked whether central agencies such as the CBI, the ED and the Income Tax are only for Lalu Prasad and his family.

"They must also take action on other people in corruption cases," he said.

He alleged that businessmen had left Bihar during the 15 years of the RJD rule as they had to pay levy to the ruling party at that time.

"There is a rule of law in Bihar now and we don't need anyone's certificate," Ranjan added.