'Slap on Face of Parliament': Chidambaram Tears into Govt Over Citizenship Bill, Calls it 'Arbitrary Fiat' 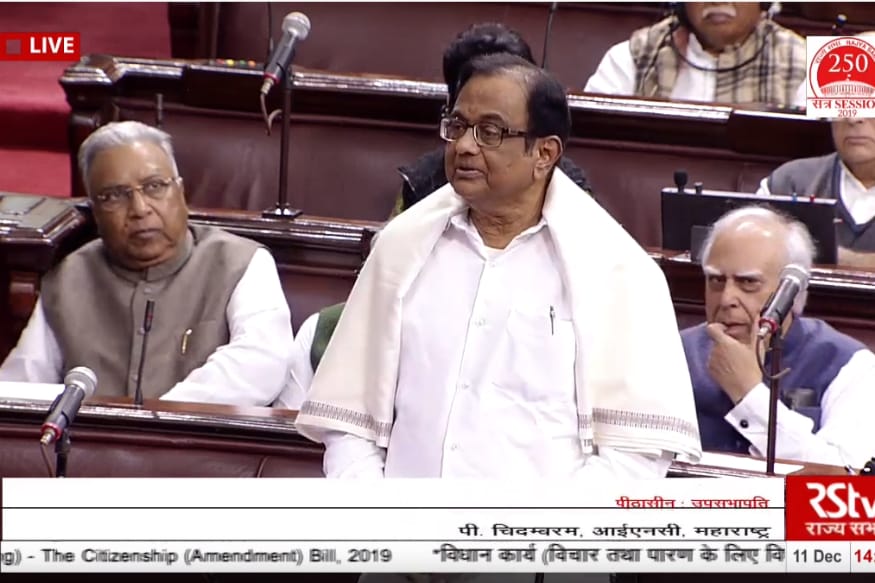 New Delhi: Former Union law minister and senior Congress leader P Chidambaram on Wednesday lashed out at the central government for bringing in an "arbitrary executive fiat" in the form of Citizenship Amendment Bill.

Expressing strong reservations on the issue in the upper house of the Parliament, Chidambaram said the bill was destined to land in the court of law. And because "unelected judges and unelected lawyers" would ultimately decide the future of this law, it was "a slap on the Parliament." He said he was "absolutely certain" that the law would be struck down.

The former Finance Minister also challenged the government to produce the advice of the ministry of law or the solicitor general, from whichever the Home Ministry had sought legal advice on this issue. "Somebody will have to take responsibility to answer these questions," He said, adding, "I dare the government to lay opinion of the law department. (The ruling party is] wrecking the constitution from within. It is an insidious bill."

The former union law minister posed many questions to the government on this bill. Firstly, why were Ahmaddiyas and Hazaras left out of the category of persecuted minorities under this law? Why were persecuted people, who will benefit under this law, only identified on the basis of their religion and not on any other basis? He also challenged the arbitrary nature of the bill. Why, for instance, were Bhutanese Christians and Sri Lankan Hindus not included in the list of persecuted minorities?

Chidambaram said he was confident that this law would be struck down by the court because apart from violating two other provisions of article 14, which provides for equality before the law, it was patently arbitrary. "We are elected representatives of people. We have responsibility to pass what is constitutional. What we are doing? You are pushing the issue to the lap of the judges. It will eventually go to the judges. But they are unelected judges, unelected lawyers who will ultimately decide what is constitutional and what is not. This is a slap on the Parliament. This is a sad day. Fortunately, they're only making a law, not amending the Constitution. I'm absolutely confident it will be struck down," he said.