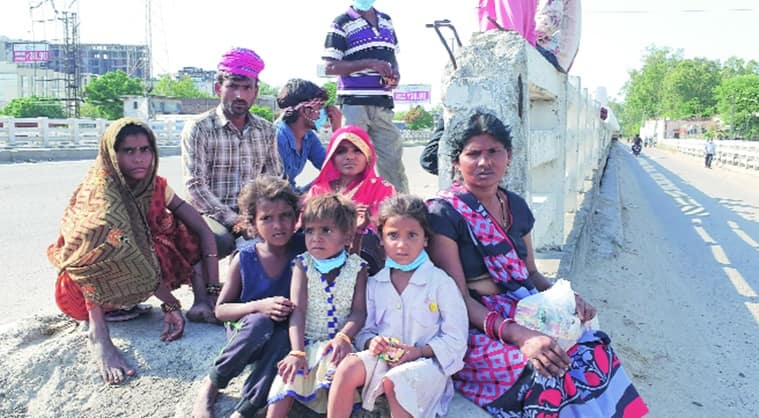 Labourers heading to Hardoi, UP, from Mohali, via the Delhi National highway. (Express Photo)

Even as Congress general secretary Priyanka Gandhi Vadra on Sunday urged Uttar Pradesh Chief Minister Yogi Adityanath to allow 500 private buses at the UP-Rajasthan to ferry migrant worker, he asked her to eschew “negative politics” in the time of the coronavirus pandemic.

“During this pandemic, the kind of negative politics, practised by the Congress, should be condemned. In Auraiya, while one of the trucks responsible for the accident had come from Punjab, another had come from Rajasthan. If any organisation or institution wants to help, send us the list of migrant labourers and permission would be given by the state government,” tweeted Adityanath, adding that 14 lakh labourers from various states, including from Punjab and Rajasthan, have been brought back and over 12,000 buses have already been deployed by the state government

In a letter written to him on Saturday, she had expressed her desire to send 1,000 buses to Uttar Pradesh to ensure that migrant labourers reach their home without walking on foot. The Congress on Sunday claimed that about 500 of these private buses are at the Uttar Pradesh-Rajasthan border near Mathura and alleged that the Uttar Pradesh government is not giving permission to ply them.

“I want to tell you that this is not the time to do politics. Our buses are standing on the border. Thousands of labourers are walking on foot, without having any food and facing all kinds of troubles to reach home. Allow us to help them,” Gandhi said in a video message on Twitter. She put out a video of the buses standing at the border.

She made the appeal, a day after 24 migrant workers were killed and 36 injured when a trailer rammed into a stationary truck, both carrying passengers, on a highway near Auraiya district. Uttar Pradesh government spokesperson Sidhartha Nath Singh on Sunday said migrant workers are not originating from UP and that Gandhi should instead send buses to Congress-ruled states such as Maharashtra and Punjab so that they can bring back migrant labourers.

Singh said Gandhi’s suggestion of giving 1,000 buses is of no relevance as she “should first understand the basic concept of logistics i.e. migrants are no originating from Uttar Pradesh”.

Congress state president Ajay Kumar Lallu alleged that the Congress is trying to help those in need but there is no co-operation from the government. He said that the party has formed a task force, which is active in districts adjacent to Delhi. People coming towards Uttar Pradesh are being ferried in personal vehicles of Congress workers, he said.