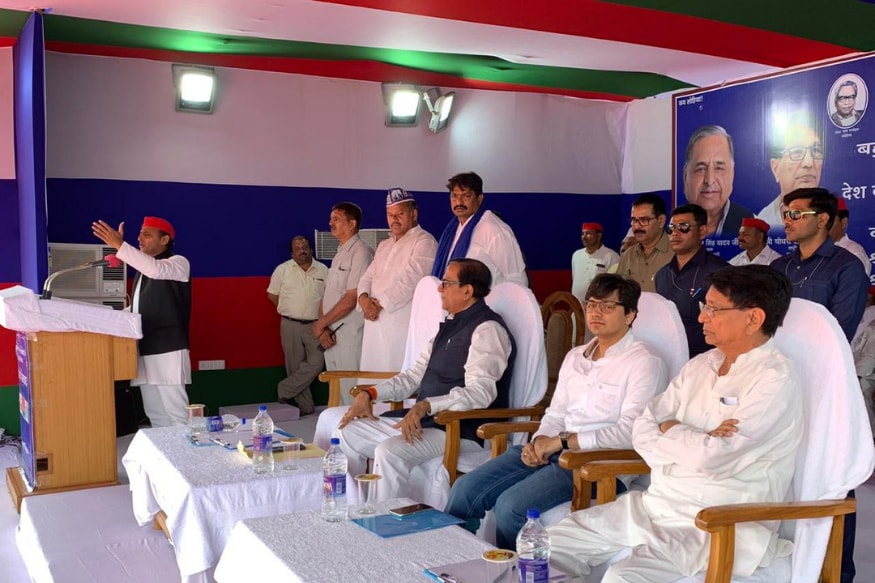 Lucknow: After the Election Commission banned BSP supremo Mayawati from campaigning for 48 hours, her nephew Akash Anand addressed a joint gathbandhan rally at the Kothi Meena Bazar Ground in Agra on Tuesday.

The political newbie, who was recently made a ‘star campaigner’ of the BSP, shared the stage with SP president Akhilesh Yadav and RLD chief Ajit Singh. In a short speech, his first, he started with the chant of ‘Jai Bhim’ that Mayawati also uses at the start and end of her rallies.

“People have turned up in such huge number due to the appeal of Mayawati Ji. I hope you all will listen to what I say and vote in such huge numbers that security deposits of opponents gets forfeited. This will be the real answer to the Election Commission. I would also like to appeal to vote for alliance candidates in your constituencies,” he said and chanted ‘Jai Bhim Jai Bharat.’

Akash has been accompanying his aunt and BSP Chief in all the major rallies and public gatherings during this elections season.

His name in the star campaigner list of 20 was only third to that of Mayawati and party secretary Satish Chandra Mishra.

Akash, an MBA graduate from London, made his first public appearance in 2016 when he accompanied Mayawati to Saharanpur.

The 24-year-old also shared the stage with her during a rally in Meerut in February 2017. According to sources, Akash’s induction to the party was a part of Mayawati’s larger policy of attracting young voters towards the BSP this time.

Recently, she even made her debut on social media by joining Twitter to directly interact with potential voters.

Dressed in a blue suit and unique shoes that got media’s attention, Akash was spotted standing behind the BSP supremo when Akhilesh Yadav came visiting to wish Mayawati on her birthday on Janaury 15. Akash was also present when RJD leader Tejashwi Yadav flew down from Patna to meet her.

In January, Mayawati had lashed out at the media for “unfavourably targeting” her nephew and calling him her successor. At that time, she had announced that in order to give a befitting reply to media, she will be inducting Akash into the BSP movement.

“Certain media houses mischievously tried to drag my nephew Akash in the entire controversy and even wrote false reports on his footwear. Now as a befitting reply to such people, I would like to announce that I will now induct Akash into the BSP movement to understand the struggle of BSP and to further strengthen it,” she had said.

Earlier, Mayawati had appointed her brother Anand as the National Vice President of the party, who was later relieved of all his posts, in the face of stiff allegations of dynast politics against her.