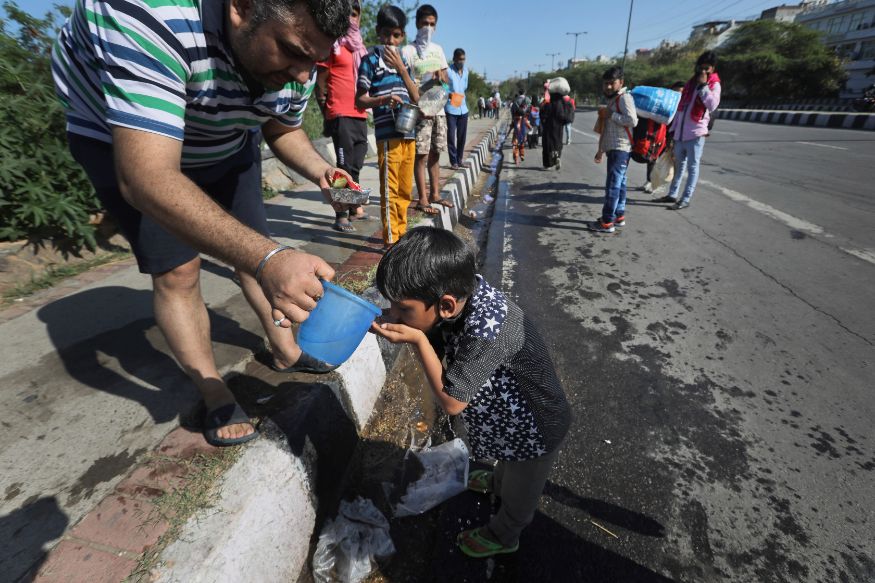 Patna: The heavy influx of migrant workers into Bihar from Delhi has caused a ripple effect with people living elsewhere, including adjoining Nepal, thronging the states borders, almost defeating the purpose of the 21- day lockdown, a key aide of Chief Minister Nitish Kumar said.

Sanjay Kumar Jha, the state's water resources minister and national general secretary of the JD(U), squarely blamed the Arvind Kejriwal government in Delhi for the situation and questioned its claims that migrants were being taken care of in the national capital.

"I am the party's in-charge for Delhi and my contacts have been telling me how buses were pressed into service to drop migrants at the UP border. They were misled by the Aam Aadmi Party with claims that the lockdown might be extended to three months. This created panic," Jha said here on Monday.

Migrants in Delhi were "made to feel they had nowhere to go except their homes and when they landed at Bihar's borders in buses arranged by the Yogi Adityanath government in neighbouring Uttar Pradesh they grew restive and refused to be stay at the relief camps "despite adequate arrangements for food and medicines", the JD(U) leader claimed.

"We had to arrange for transportation of nearly 25,000 migrants to their native places. There are people staying put at the scores of relief camps set up along Bihar's borders with UP, West Bengal, Jharkhand and Nepal. But they have to do so willingly. We cannot use excessive force, Jha said.

He also pointed out that the suspension of two government officials in Delhi for violation of lockdown "vindicates what the Bihar chief minister has been saying that the mass exodus was defeating the very purpose of the nationwide restrictions announced by the Prime Minister".

"Kejriwal is now making empty pleas, urging people to stay back and claiming that his government is providing food to four lakh migrants. I challenge him to produce a video footage to support the bogus claim," Jha added.

The Bihar minister, who hails from Kosi region, close to Nepal border, also expressed fears that the mass exodus from Delhi could have a "ripple effect" and that migrants in other areas have started to making a beeline to Bihar's borders in a bid to return home.

"Many Bihari workers, mostly from my Kosi-Mithilanchal region, eke out a living in Nepal. Now we have received information that some of them have gathered at Birganj and are trying to cross over. If things continue in this fashion, I wonder how we would be able to achieve the objective of lockdown preventing the spread of COVID-19," he stated.

The Bihar minister, however, asserted that once the migrants reached their villages, measures were taken to ensure they do not mingle with local population and are placed under quarantine till the medical authorities clear them.

"Block level officials and panchayats have been instructed to segregate migrants from local population so that testing and quarantining, which had taken off well in Bihar, does not go off the rails," he added.