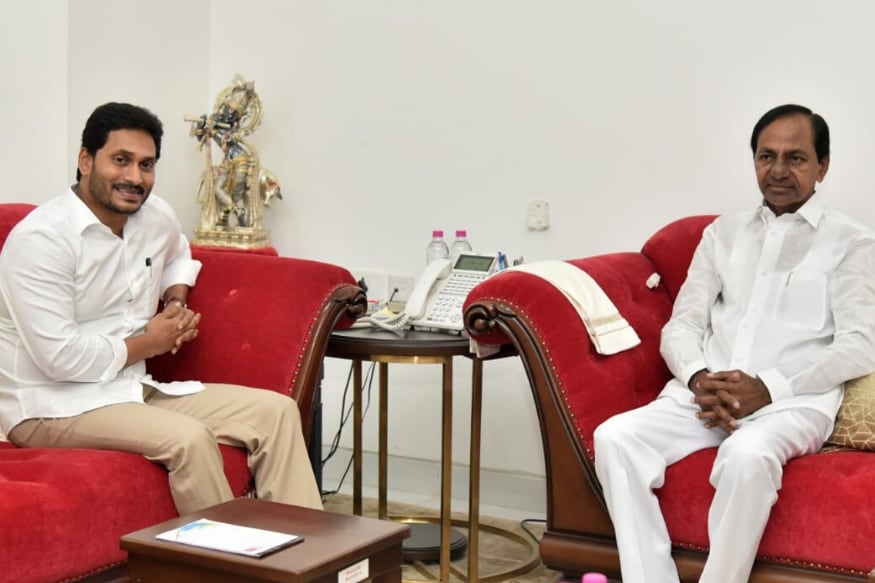 Hyderabad: Telangana Chief Minister K Chandrasekhar Rao and his Andhra Pradesh counterpart YS Jagan Mohan Reddy on Monday decided to act in a spirit of give and take on all issues concerning the two states.

Both the leaders reached a consensus on transferring Godavari river water to the irrigated area served under Krishna river. Reddy and Rao, who is also known as KCR, had a meeting for about six hours at the latter's camp office-cum-official residence here and discussed issues concerning the two states and also local and national political situation, a press release from the Telangana CM's office said on Monday night.

The chief ministers also decided to soon resolve issues mentioned in the 9th and 10th schedule of the Andhra Pradesh Re-organisation Act (concerning division of government corporations, institutes and others).

The duo said they felt that farmers of Rayalaseema in Andhra Pradesh and Telangana's Mahabubnagar and Nalgonda districts, whose irrigation needs are served under the Krishna river, are facing shortage of water in view of inconsistent availability of water in Krishna, it said.

They decided that the irrigation needs of these farmers can be met by transferring Godavari river water to the irrigated area served under Krishna. They decided to discuss in detail on the modalities for transfer of Godavari water in their next meeting, it said.

Rao and Reddy spoke to their respective Chief Secretaries and asked them to meet soon towards resolving the issues concerning 9th and 10th schedules of the AP Reorganisation Act. These issues remained unresolved since the bifurcation of undivided Andhra Pradesh in 2014.

In their previous meetings after Reddy became the Chief Minister of Andhra Pradesh, the duo had decided to work on sharing river waters for the benefit of both the states.

Regarding YSR Congress government's proposal to decentralise the administration by developing Visakhapatnam as executive capital, Rao is said to have supported the move.

Sources said after Reddy explained to Rao the social and political circumstances under which he is mulling the idea to develop Vishakhapatnam and Kurnool along with Amaravati, the latter gave him some suggestions on the same.

Rao is also said to have cautioned the first-time chief minister of the ongoing agitations by farmers of Amaravati who are protesting against the move. The farmers had donated lands during the previous Telugu Desam Party (TDP) government led by N Chandrababu Naidu for the development of the capital city.