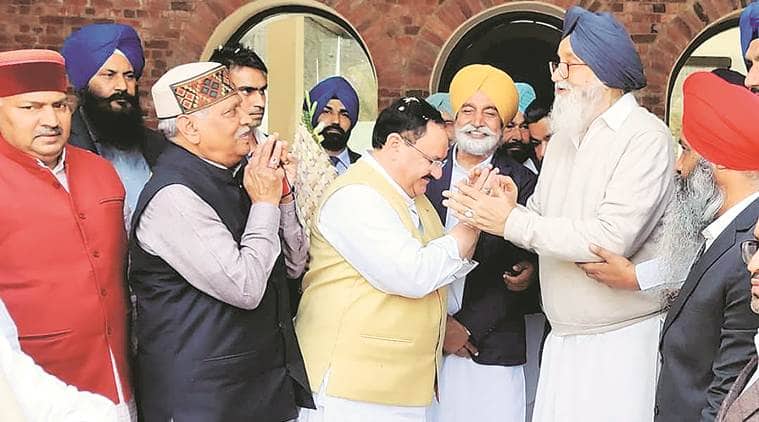 “This was a visit in my personal capacity. I came to invite Badal Sahib for the wedding of my eldest son. I have personal relations with Badal Sahib since long… Politics comes later. This meeting should not be looked at with any political angle,” said Nadda, who was on first visit to Punjab after being elected BJP national president.

The meeting assumes significance following the strain between the BJP and the its oldest ally SAD that had announced it would not contest the Delhi assembly elections following differences with the saffron party on the Citizenship (Amendment) Act (CAA). It later backed BJP candidates in the assembly elections.

On February 13, Badal, a former Punjab CM, had said that “present situation in the country is not good” and had suggested that “all religions should be respected and take along minorities, take along your allies if you have to be successful in running the government”.

Emerging from the meeting, Nadda said, “We have good relations with the Badals,” Nadda said.

He was accompanied by BJP vice president Prabhat Jha, also the party’s in-charge for Punjab.

Nadda got a grand welcome with flowers and the traditional bhangra when he reached Badal village. From Badal village, Nadda went to Amritsar to pay obeisance at the Golden Temple, Durgiana Mandir and Ram Tirath.

“I addressed meeting of BJP office bearers in Amritsar. I told them that we have to work unitedly to connect public with the ideology and principles of the party for the integrated and new India,” Nadda later said in a tweet.

While reiterating that he did not discuss politics with Badal, Nadda said, “I keep meeting with (SAD president) Sukhbir Singh Badal in Delhi. We all have to work for development under leadership of Prime Minister Narendra Modi. About the SAD-BJP alliance, I would only say that it is a strong alliance and it will work in future also:.

Earlier, Nadda landed at Bathinda airport travelled by road to Badal village. Nadda got a grand welcome with flowers and the traditional bhangra when he reached the village.