'Had a Good Debate': Mamata Banerjee After Meeting PM Modi to 'Mend Ties With Centre' 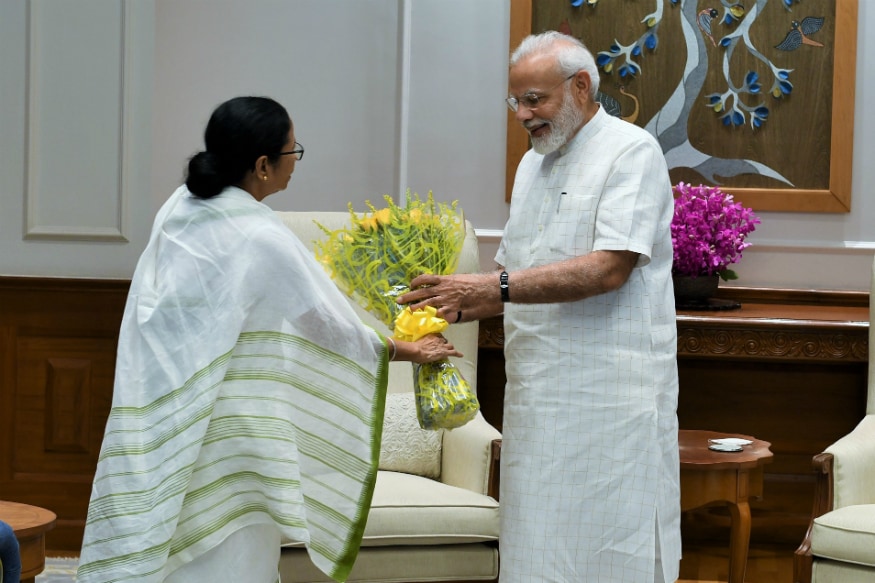 New Delhi: Prime Minister Narendra Modi on Wednesday afternoon met Bengal chief minister Mamata Banerjee in Delhi. On the top agenda of the meeting was the betterment of ties between the Centre and the West Bengal government.

The Prime Minister's Office tweeted pictures of the two leaders at the official residence of Modi. Banerjee is seen presenting a bouquet to the prime minister.

After the meeting, Banerjee briefed media said she had a good debate with PM Modi. "Issues of unemployment was raised. I will also be seeking an appointment with the home minister," she said.

On Tuesday, Banerjee had described the meeting with the prime minister as a "courtesy" call. Banerjee had said she would highlight various issues such as central funds due to the state during her talk with the PM.

Earlier, leaders of the BJP as well as the TMC said that apart from the issues of central funds, name change of the state and the concerns of Public Sector Banks, the Bengal chief minister is on a “cooling mission” to mend ties with the government and get the best possible deal for Bengal.

The war of words between the two leaders had escalated before the Lok Sabha elections. While Banerjee accused the BJP of indulging in divisive politics, PM Modi flayed her for the political violence in the state. Modi and Mamata had last met at the annual convocation ceremony at Visva Bharati University in Shantiniketan in May 2018.

Meanwhile, Banerjee had a chance meeting with Modi's wife Jashodaben on Tuesday at the Kolkata airport as she was on her way to Delhi to meet the PM.

BJP Workers at Pro-CAA Rally in Mangaluru Threaten to 'Behead' Cong MLA, He Says Not Keen on Action