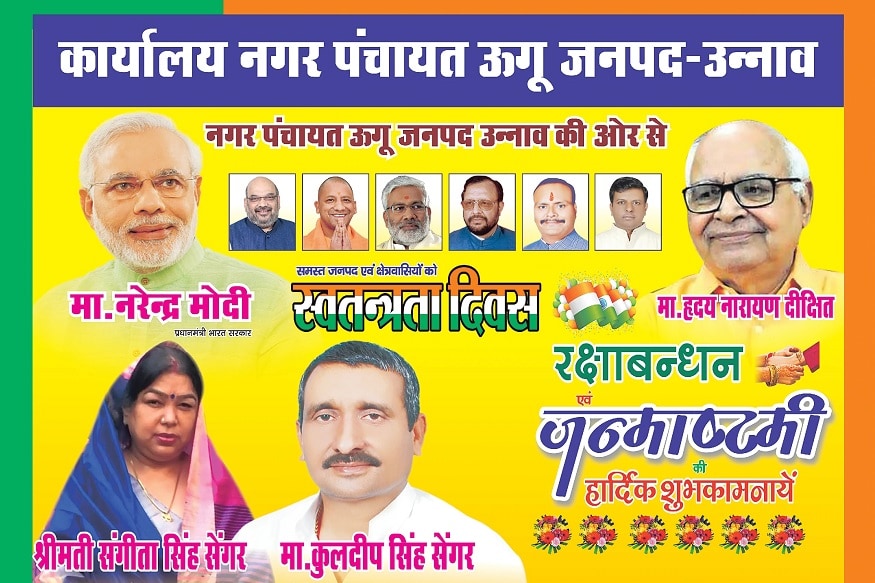 “CBI submitted the report. The Supreme Court has also reprimanded, but the BJP's people still have rape accused Kuldeep Singh Sengar’s photo alongside top BJP leaders. Will they comment?” Priyanka Gandhi said in a tweet.

Rape accused MLA Kuldeep Singh Sengar who was expelled from the BJP was featured in an advertisement in a local newspaper along with Prime Minister Narendra Modi given by a party leader on the occasion of Independence Day.

In the advertisement inserted in the local edition of a leading daily, Ungu Nagar Panchayat chairman Anuj Kumar Dixit used the picture of the Bangarmau legislator and his wife Sangeeta Singh Sengar, who is the chairman of the zila panchayat.

Ungu falls under the Bangarmau assembly segment and it was Sengar who had reportedly brought Dixit into the BJP fold.

Dixit, when approached by the media, defended himself for giving Sengar's picture. He said, "It is there as he is the MLA of our area." The BJP has distanced itself from the controversy.

Party spokesperson Shalabhmani Tripathi said, "It might have been someone's personal choice to give Sengar's photograph. It has nothing to do with the party or the state government."

"Whatever had to be done by the party or by the government, has been done. We have no sympathy for Sengar," he told PTI in Lucknow.

The advertisement is being seen as a fresh embarrassment to the BJP, days after its Hardoi legislator Ashish Singh Ashu sympathised with Sengar and wished him to overcome his "difficult times".

Sengar, who is in the jail for a year now, was expelled by the BJP after the Central Bureau of Investigation (CBI) registered an FIR against him in connection with an accident involving the Unnao rape victim's car on July 28.

With Inputs from PTI