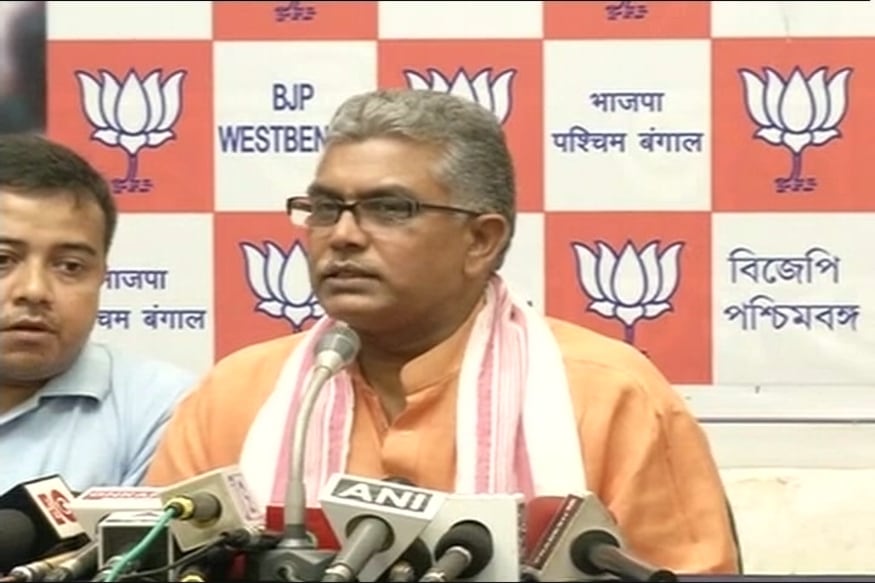 Kolkata: West Bengal BJP president Dilip Ghosh Monday claimed that eight TMC MLAs are in touch with him and are willing to switch over.

Ghosh and other top BJP leaders participated in a Ganesh Puja on Monday held at a club of which TMC leader Sabyasachi Dutta is the president on Monday fuelling speculations of his possible move to BJP in the near future.

Dutta, who presently has a strained relationship with the party leadership and had relinquished his post as mayor of Bidhannagar Municipal Corporation in July this year, was seen greeting Ghosh, BJP national secretary Arvind Mennon and senior leader Mukul Roy.

"Everyday TMC leaders and workers are joining BJP in various parts of the state. Around eight TMC MLAs are in touch with me. We are in talks with them lets see when they can join," Ghosh said.

His comment drew sharp reactions from TMC, which said BJP does not have any mass base in Bengal and has taken to poaching of TMC leaders to increase its public support in the state.

"This strategy will backfire for BJP in the days to come. They (BJP) does not have any leaders to lead the party so they are poaching on our party leaders and workers," senior TMC leader and minister Jyotipriyo Mullick said.

Now it depends on who wants to attend it and who does not". Ghosh said he had come to attend the puja at the invitation by Dutta. "Being a public representative, we have to attend lots of invitations. So when we get one we don't judge it on the basis of politics".

Dutta, the first mayor of the corporation which was formed in 2015, was in the eye of a political storm after he participated in agitation against West Bengal's power department and slammed the TMC government for not fulfilling the employees' demands for increasing their salaries.

The party leadership was also annoyed with Dutta over his meetings with senior BJP leader Mukul Roy.

Since the 2019 Lok Sabha poll results, which saw BJP's sharp rise in the political scenario of the state after winning 18 out of the 42 Lok Sabha seats in the state, seven TMC MLAs and one Congress and CPI(M) MLA each has switched over to the saffron camp.