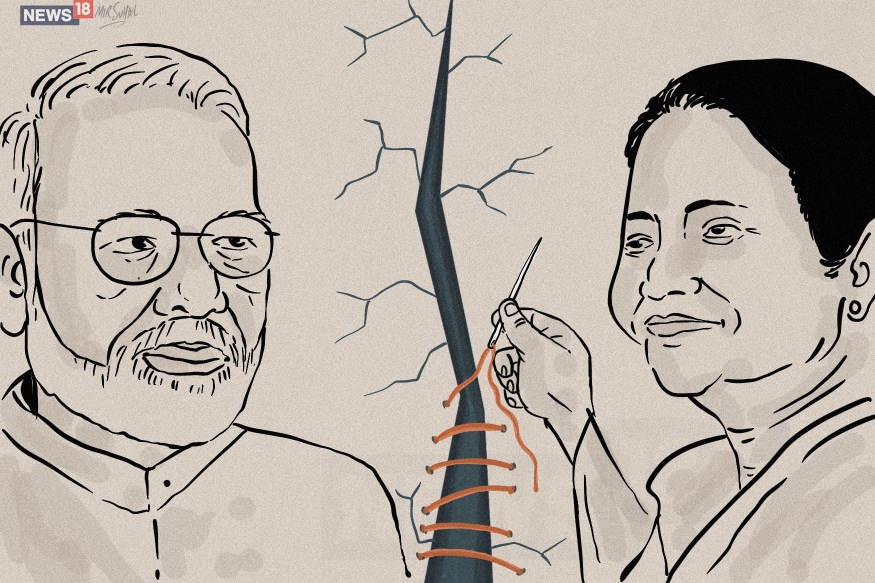 Kolkata: Repairing ties with the Centre will be the top agenda of West Bengal Chief Minister Mamata Banerjee who is set to meet Prime Minister Narendra Modi in New Delhi on Wednesday.

Leaders of both the Bharatiya Janata Party and the TMC say that besides the issues of central funds, name change of the state and the concerns of Public Sector Banks, Banerjee is on a “cooling mission” to mend ties with the government and get the best possible deal for Bengal.

This stance was visible on September 12 when Banerjee softened her stand against PM Modi during a massive rally against the National Register of Citizens (NRC), saying she did not disrespect the chair of the prime minister as she, too, held a constitutional post.

A senior TMC leader, who did not wish to be named, said: “For Didi, serving people matters the most. She dedicated her entire life to the people of Bengal. It is good that she is meeting our Prime Minister to discuss issues that will benefit us. In governance, it is important to maintain a healthy relationship with the Centre and keep all political differences at bay.”

Another source in the party said: “It’s her cooling mission. It’s like breaking the ice after months of standoff during Lok Sabha polls.” He added, “Since Banerjee has been one of PM Modi’s strongest critics, people are speculating many things. But we must accept that in a federal structure, a chief minister must have regular interaction with the Prime Minister. After all, both are constitutional posts and one should not link it with politics. Politics is different and fought in a different platform and constitutional post is different. We all have to follow the constitution,” he added.

Before the Lok Sabha poll, while Banerjee accused the BJP of indulging in divisive politics, PM Modi flayed her for the political violence in the state.

Reacting to the speculations, BJP general secretary Pratap Banerjee said: “In a federal structure, any chief minister can meet our Prime Minister. What is the issue? I don’t see anything.”

Banerjee is also likely to meet the family members of Arun Jaitley and Sushma Swaraj — former Union ministers who passed away recently — besides exchanging pleasantries with other cabinet colleagues.

On May 6 this year, PM Modi wanted to meet Banerjee and her senior administrative officials for a review meeting on Cyclone ‘Fani’ but the request was turned down by the Bengal CM. She had also surprised all by accepting the invitation for the swearing-in ceremony of PM Modi but later backed out.

The last time Banerjee met PM Modi was during the annual convocation ceremony of Visva Bharati University held in Shantiniketan on May 24 last year.