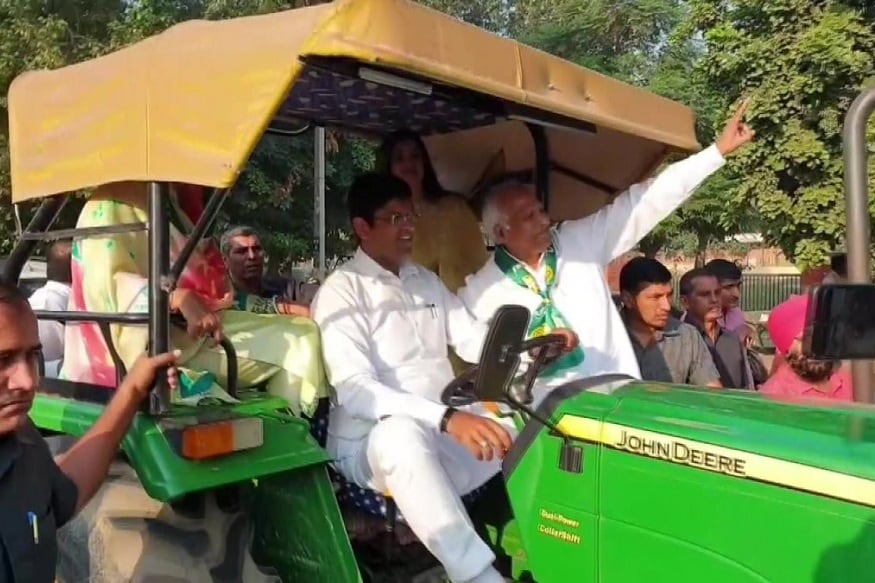 Chandigarh: At a Jat-dominated seat in Haryana, Dushyant Chautala, 31, who is leading young outfit Jannayak Janata Party (JJP), a breakaway faction of the once prominent Indian National Lok Dal (INLD), reached a polling booth in Sirsa by riding on a tractor. His mother Naina Chautala and his wife were riding with him.

"People (in Haryana) are looking for a change and that is why we reached the polling booth with a mode of transportation that is our identity," he told the media.

Chautala is confident of the forming the next government. He admitted that support extended by rebel state Congress chief Ashok Tanwar would help his party getting maximum seats.

"Boond-boond se sagar bharta hai (every drop contributes to the ocean). So is people (Tanwar) joining our party -- strengthening our base," he added.

Chautala is being seen as the real inheritor of his great grandfather and former Deputy Prime Minister Devi Lal's political legacy.

So is his estranged uncle and Devi Lal's grandson Abhay Singh Chautala, who is contesting from Ellenabad in Sirsa.

Sitting legislator Naina Chautala is contesting from Badhra in Bhiwani district via his son's outfit JJP.

Devi Lal's son Ranjit Singh has fielded himself as an Independent from Rania in Sirsa district after the Congress denied him a ticket.

The voting will continue till 6 pm in Haryana.