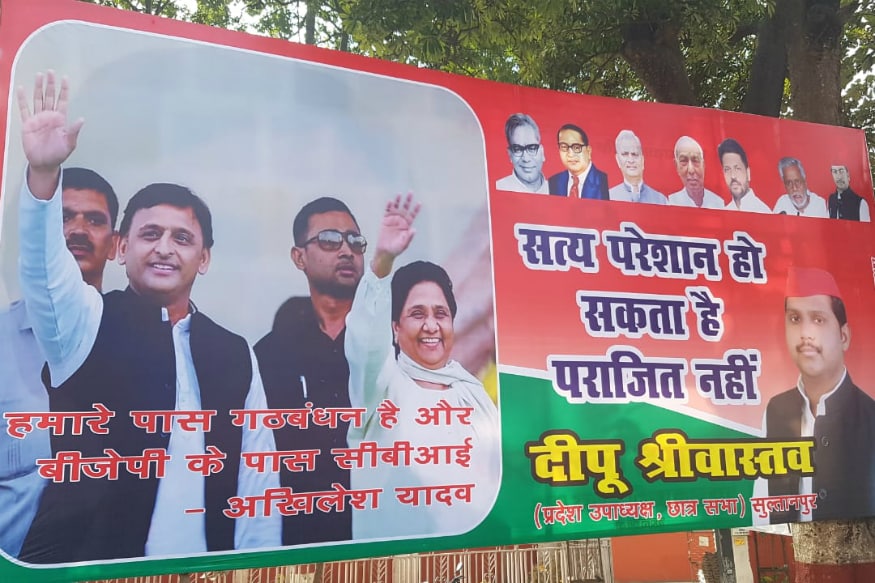 Lucknow: Days after the CBI conducted over a dozen raids in connection with illegal mining in Uttar Pradesh during the tenure of Samajwadi Party government, huge hoardings highlighting the BSP-SP bonhomie have sprung outside the SP headquarters in Lucknow

The hoardings, put up by SP Youth Wing leader Deepu Srivastava from Sultanpur, have BSP chief Mayawati and SP president Akhilesh Yadav sharing space and carry Akhilesh’s recent quote: ‘Hamare paas gathbandhan hai aur BJP ke paas CBI (We have alliance and the BJP has CBI). Akhilesh had made the statement after his name surfaced in the illegal mining case.

Mayawati had on Monday extended her full support to Akhilesh after reports emerged that he might be quizzed by the CBI in connection with the mining scam. “Do not be shaken by such gimmicks,” she told him, while terming the reports as ‘political animosity’ of the ruling BJP. The BSP chief also alleged that like the Congress, the ruling BJP was ‘misusing’ the government machinery to ‘trap’ its opponents in false cases.

“The CBI raids and later the threat of quizzing by the CBI in a mining scam is nothing but political animosity of the BJP. Such petty politics and political conspiracy are not new for the BJP. The people of the country have understood it and they will teach the BJP a lesson in the Lok Sabha polls,” she had said in a press release.

Mayawati had alleged that soon after the news of SP-BSP alliance for the Lok Sabha polls came out, the BJP government used the CBI to conduct raids and the news of Akhilesh being quizzed was deliberately spread.