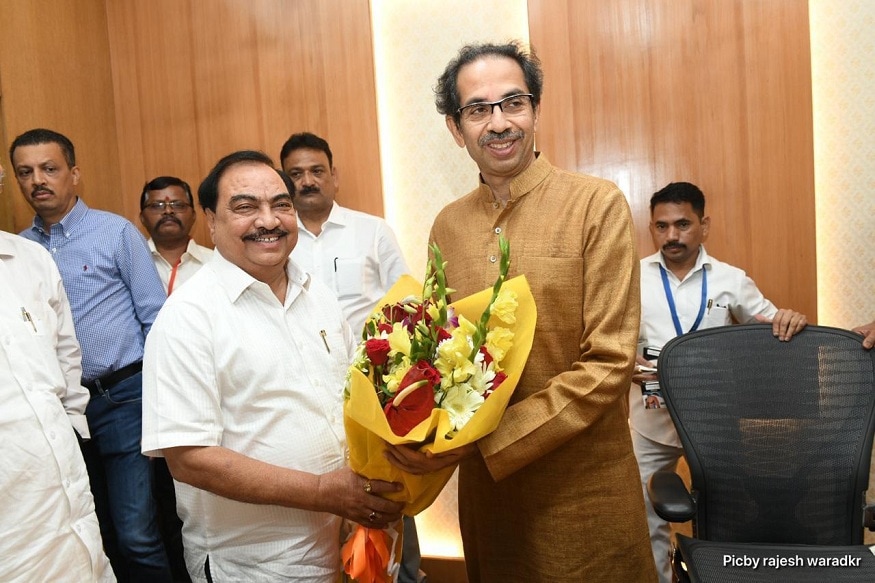 Mumbai: Amid intense speculation about his next political move, senior BJP leader Eknath Khadse on Tuesday asserted he was not upset with his party and had not taken any decision to quit the saffron outfit.

The comment came three days after the former Maharashtra minister issued a veiled warning to the party leadership that he would look at "other options" if his "humiliation" continued.

Khadse has met NCP president Sharad Pawar and Chief Minister Uddhav Thackeray in the last two days, but maintained there were no political motives behind these meetings.

Khadse met Thackeray here at Vidhan Bhavan for nearly 40 minutes on Tuesday, a day after calling on Pawar in Delhi. Talking to reporters outside Vidhan Bhavan, the BJP leader said he had met Pawar in connection with two pending irrigation projects worth Rs 6,500 crore in his home district of Jalgaon in North Maharashtra.

"I sought Pawar's help in getting funds for the projects cleared at the state government-level. I met Uddhav Thackeray to follow up on these issues," he said.

Pawar had played a key role in bringing the Sena and the Congress together last month to form the Maha Vikas Aghadi government in which the NCP is also a key constituent.

Khadse said he requested Thackeray to expedite the construction of a memorial to late BJP leader Gopinath Munde in Aurangabad in central Maharashtra.

"When I was a minister, I had sanctioned a plot belonging to the animal husbandry and dairy development department for the purpose... But, after I quit the ministry, the project did not take off," said the BJP veteran who had resigned from the Devendra Fadnavis-led cabinet in 2016 over land grab charges.

Khadse said he asked Thackeray to look into the matter and make an announcement about the memorial on December 12, the birth anniversary of Munde, a former Union minister who also served as deputy chief minister of Maharashtra.

"The project will cost Rs 30 crore to Rs 40 crore. Uddhavji agreed to expedite the project and also said he would visit the site when he travels to Aurangabad," he said.

Khadse said he will take part in the 'Swabhiman' rally organised by BJP leader Pankaja Munde (daughter of Gopinath Munde) at Gopinathgad in Beed district on December 12.

The 67-year-old BJP leader, who was denied ticket for the October 21 assembly polls, rejected suggestions that he was upset with the party.

Khadse, a prominent OBC leader, said there was no substance in reports that the BJP had deputed former ministers Sudhir Mungantiwar, Vinod Tawde and the party's in-charge for the state, Bhupendra Yadav, to pacify him.

"We keep meeting each other and we also discuss why our government could not be formed. Having been in politics for so long, I have good relations across parties... So there is nothing wrong in Congress and NCP leaders feeling that I should join them. But, I have not taken any decision," he said when asked about his future move.

Were Ram & Sita Insulted at Periyar Rally? As Rajini Kicks Up Row, Here's What Facts Say About '71 Event

SOMEONE MADE A FUNNY MEME ABOUT ME