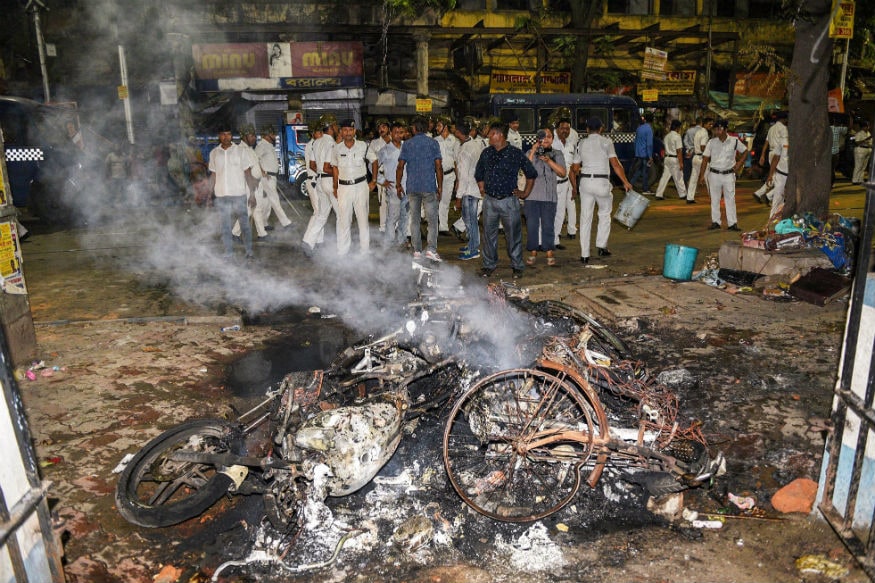 New Delhi: Union Finance Minister Arun Jaitley on Tuesday deplored the violence during BJP president Amit Shah's roadshow in Kolkata and wondered if West Bengal is being run by a "government of gangsters".

Has Bengal acquired a Government of Gangsters? The attack on Amit Shah’s peaceful rally by the TMC is deplorable . Is a free & fair Poll possible in Bengal? All eyes are now on the Election Commission.

"Keep it up Amit Bhai. Only Modi Ji and you can do in Bengal what others failed to realise. Victory is now at an arm's length distance," Jaitley added.

All eyes will be now on the Election Commission of India to ensure free and fair Lok Sabha polls in the state in the last phase on May 19, he said in a series of tweets.

Defence Minister Nirmala Sitharaman met with Election Commission officials and appealed them to enforce a ban on the WB CM from campaigning.

Uttar Pradesh CM Yogi Adityanath called for the dismissal of the West Bengal government and said that they will request the President of India the same.

Maharashtra Chief Minister Devendra Fadnavis said that the people of West Bengal will now teach a lesson to Banerjee. “Mamata Banerjee is unwell due to the growing support base of the BJP since the beginning of this election. Incidents of not giving permission to top BJP leaders to campaign in Bengal and killing of BJP workers symbolize that the state is stoking democracy. Today, our national president Amit Shah was also attacked,” he said.

Sonowal in a statement also demanded strict action against those involved in incident.

BJP and TMC supporters fought pitched battles on the streets of Kolkata during a massive roadshow by Amit Shah, who escaped unhurt but was forced to cut short the jamboree and had to be escorted to safety by police.

Parts of the city plunged into a welter of violence as the BJP president's convoy was attacked with stones by alleged TMC supporters from inside the hostel of Vidyasagar College, triggering a clash between supporters of the two parties, officials said.

Trouble began after stones were pelted at Shah's convoy as it passed through College Street and the arterial Bidhan Sarani on its way to Swami Vivekananda's residence in north Kolkata, a little over 3.5 km from Esplanade in the heart of the city, where it began.

Polling is schedule to take place for nine Lok Sabha seats of West Bengal on May 19, the seventh and last phase of the ongoing general elections.