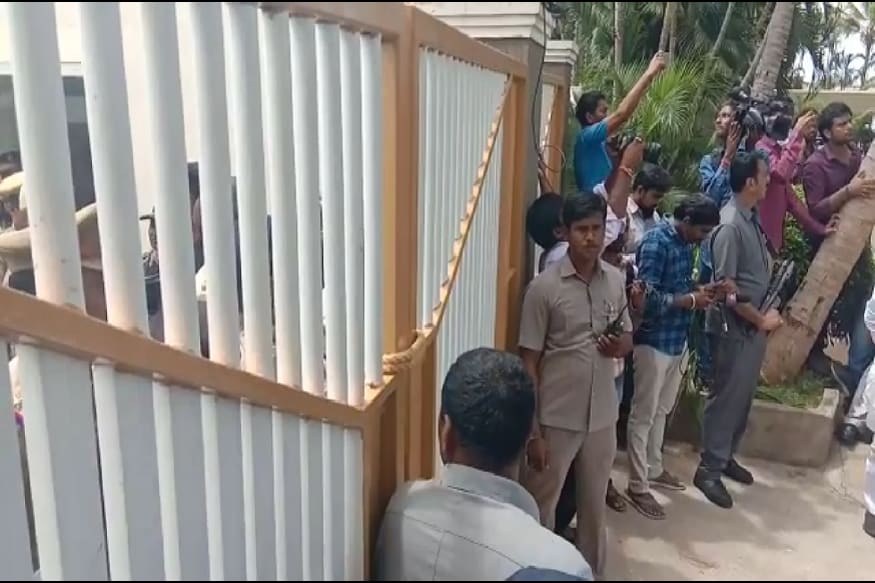 Police have clamped prohibitory orders in Palnadu region of Guntur district to prevent any showdown as the YSR Congress Party (YSRCP) too called for a counter protest march. As police did not allowing Naidu to leave his house, he launched a day-long fast at his home. During a teleconference with party leaders, Naidu asked them to protest wherever they were stopped by the administration.

TDP leaders and workers heading to Naidu's house and also to Guntur were stopped at different points and arrested by the police.

Tension prevailed in Guntur town as additional police forces were deployed to foil TDP's march planned to begin from the camp set up by the party for victims of violence by the ruling party leaders.

Senior police officials till late Tuesday night tried to persuade the inmates of the camp to return to their villages and assured them of security. However, only few villagers agreed to leave the camp.

TDP alleged that the police is not allowing them to serve food to 150 families sheltered at the camp to force them to leave the camp.

Director General of Police Gautam Sawang had on Tuesday said there was no permission for meetings, processions, rallies or protests in Palnadu region as Section 144 of Criminal Procedure Code (CrPC) and Section 30 of Police Act were in force.

However, TDP had announced that it will go ahead with 'Chalo Atmakur'.

TDP has alleged that its eight workers were killed in the attacks by YSRCP leaders, most of them in Palnadu region. It claimed that 500 TDP activists and sympathisers were attacked since the announcement of election results in May.

The ruling YSRCP on Tuesday announced that it will also conduct 'Chalo Atmakur' with victims of the attacks by TDP leaders during last five years. Its leaders alleged that Naidu is resorting to cheap gimmicks.

Home Minister Sucharita dubbed those at TDP camp in Guntur as "paid artists".

Simultaneously, some leaders of the ruling YSR Congress were also detained in Guntur as they too gave a call for a similar programme as a counter to the TDP.

The TDP announced that Naidu would be observing a day-long fast inside his riverfront residence at Undavalli in protest against the police action. The TDP President wanted to lead a group of people belonging to Palnadu region of Guntur district to a village called Atmakuru.

"I have planned to go to Atmakuru to drop the villagers who were driven out by YSRC men and police back in their village. This is not an agitation but solidarity with the people who are victims of political factionism," Naidu, who is the Leader of Opposition in the state assembly, said.

Alleging that the TDP was only seeking to create a scene using "paid artists," the YSRC too gave a call for 'Chalo Atmakuru' but police denied permission to both sides and clamped prohibitory orders under Section 144 Cr PC.

A large police force has been deployed in Atmakuru and also in Palnadu region to prevent untoward incidents.