View from the right: Remembering Sushma 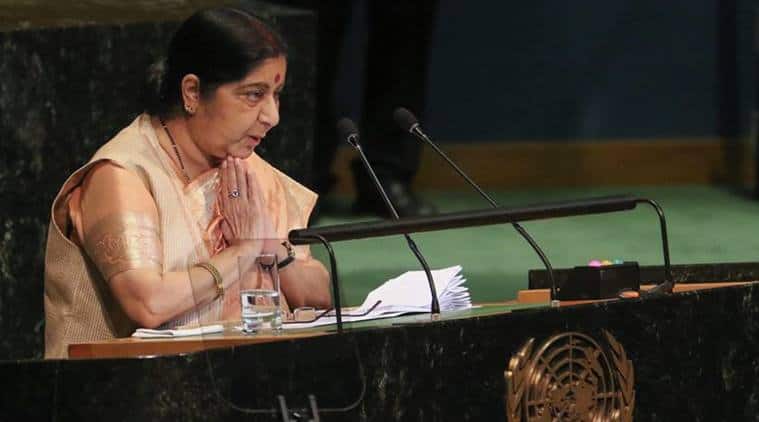 Organiser and Panchajanya remember senior BJP leader and former foreign minister Sushma Swaraj, who died on August 6. Both the publications have multiple pieces on her. In Organiser, editor Prafulla Ketkar writes that Swaraj was “not just in appearance, but even in qualities she was was Bhartiya womanhood personified”. He writes: “A typical saree wearing, relatively short with big Bindi and strong Sindoor, (Swaraj) proudly carried her Bhartiya identity at global stage.”

In Panchajanya, editor Hitesh Shankar writes that she was “undefeated”. In the backdrop of her death on the same day as the government read down Article 370, Shankar says that Swaraj’s “life journey came to an end as the promise was fulfilled”. He mentions that the promise of abrogating Article 370 was “in the hearts of its cadre, in the roots of the party” since the days of Jana Sangh.

The editorial in Organiser on the reorganisaton of the the erstwhile Jammu and Kashmir state says that though the RSS and BJP “since Jana Sangh days”, and “many nationalists were clear that Article 370 and its misuse in the form of 35A… are at the root of most of the problems in J&K, larger social awareness was not there”. “Multiple frauds at electoral and Constitutional level were incurred in the name of the ‘special status’ given by the temporary provision” and that “barring a few familes”, the abrogation is the “real swaraj” from the “72 years of misgovernance; the freedom from election rigging, discrimination, infiltration and underdevelopment”. It adds that the work of “giving a greater touch” to all the people of the two new UTs is the “real task at hand”.

Another article says the “onus is on the government to ‘win the hearts and minds of all Kashmir Muslims’”. The article addresses Kashmir’s Muslims. It says: “Wake up, oh the blind men of Hindostan! Particularly those cronies belonging to the Congress Party Dynasty! Deradicalisation (sic) of Kashmiri Muslims is a Himalayan challenge. No one can deny the mood of the nation and also those in the Jammu and Ladakh regions, applauding the bold decision by Modi-led NDA government.”

It says Kashmiri Muslims must “understand that they should not allow Srinagar and other towns and villages (from Paradise to Hell) to undergo the same fate as infrastructure damage in 16 towns and cities across Syria”. It also adds: “At the same time, Kashmiri Muslims must also realise that India is unlike the US, Kashmir is also unlike Afghanistan. Indian troops are not aliens like the US troops in the Middle East. India’s patience, punishment withstanding capability and resilience is far greater than Pakistan and its cronies in India.”

Panchajanya claims that “removal of Article 370 was the demand of the times” and the Modi government has made the “impossible possible” and “fulfilled the expectations of crores of Indians”.

The Organiser Independence Day special issue has an essay by RSS General Secretary Manmohan Vaidya on the organisation being “nothing but the execution of the visions for revitalising spirituality and society before political change exhibited in the writing of Swami Vivekanand, Rabindranath Tagore and B R Ambedkar”. This has been the “soul of Bhartiya nationalism” and the reason why “RSS finds resonance across the regions”. Vaidya writes that RSS founder K B Hedgewar believed that “for freedom to be realised it was essential that mental, spiritual and social awakening needs to take place alongside”. Tagore, he says, wrote in “Swadeshi Samaj” that a “welfare state is not our Bhartiya tradition”. Vaidya blames the welfare state for the spread of Christianity and Islam during the crusades to lands where people were dependent on the state.