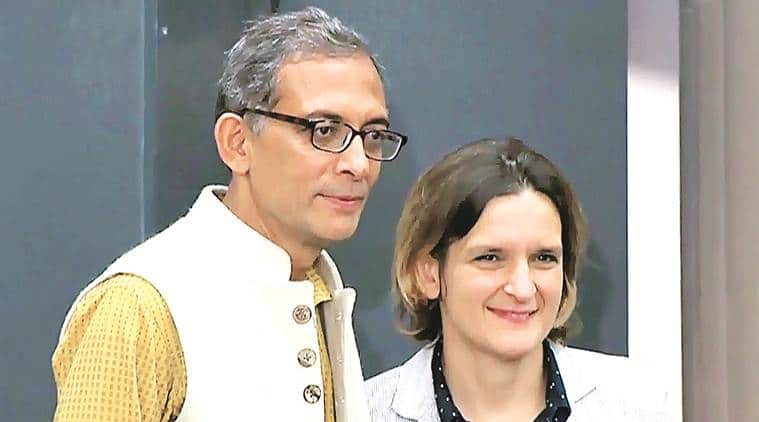 Last night our son, Karna, his wife and grandson dropped in for dinner. While chatting, conversation drifted to the Economics Nobel Prize this year, and we did some guessing and gossiping about who might get it. Karna predicted it would go to Abhijit Banerjee, Esther Duflo and Michael Kremer. We all agreed that would be a fantastic choice. The only question was, they are so young (58 years, 46 years and 54 years, respectively), would this happen this year would we have to wait for a few more years.

It is so rare to get the Nobel prediction right that when I got woken up this morning by journalists calling to get my reaction and learned that the prize has just been announced and it has gone to exactly the three names we talked about the previous evening, I was thrilled.

This is a richly-deserved award. The prize has been given for their work on randomised control trials used in the broad area of poverty eradication and policies for better health and education. Research done by Abhijit, Esther and Michael has transformed the way development economics is practised nowadays, not just in United States, where they are based, and India and France, where Abhijit and Esther are from, but the world over. The Poverty Action Lab that they founded is active all over the world, from Asia and Africa to Latin America.

Let me give you a sample of some of their work which I have used elsewhere. It had long been suspected that there is a connection between the better provision of local public goods and the local government having women leaders. But we had no idea which way the causality runs. Is it that more progressive villages elect women, or that women leaders are more effective as policymakers and facilitate the better provision of public goods? Esther Duflo, along with Raghav Chattopadhyay, did an outstanding study of India’s decision to reserve some of the leadership of local governments — village panchayats — for women. Since the choice of which seats are to be reserved for women is done by lottery in India, since 1993, following a constitutional amendment, this turned out to be a perfect setting for studying how the election of women leaders could affect economic well-being in the locality. By studying a massive data set from West Bengal and Rajasthan, they proved that the provision of local public goods, like water supply, improves in statistically significant ways in villages where women are elected to lead.

Likewise, Michael Kremer’s research, done with Ted Miguel, on what de-worming in schools in Kenya could do for child health and absenteeism of school students was quite remarkable. By doing a massive randomised controlled study, they showed that benefits of deworming could be staggering, way beyond the costs of such an intervention. There are many similar and important findings recorded in the book by Abhijit Banerjee and Esther Duflo, Poor Economics: A Radical Rethinking of the Way to Fight Global Poverty.

It should be mentioned here that quite apart from the field for which the three of them got the Nobel, they have made important contributions to other areas of economics. Michael Kremer’s research on O-rings, which uses an analogy from the disaster that occurred when the space shuttle, Challenger, crashed in 1986, to explain poverty traps was pioneering. It is a model that I have used in my own work. Abhijit Banerjee’s work on the mathematics of herd behavior, which he did as a PhD student at Harvard University, is an outstanding piece of research.

Congratulations to all three of them. All three are great economists but also wonderful people with genuine commitment to do their bit for a better world. It is worth pointing out here that since I chair the jury for the Infosys Prize in the Social Sciences, I feel very happy personally that two of the Nobel Prize winners this year won the Infosys Prize even earlier — Abhijit Banerjee and Esther Duflo.

With Abhijit having studied at Kolkata’s South Point School, Presidency College and then at JNU in Delhi, India should be proud of his achievement and remind itself of the importance of science and scientific thinking. With the slowdown in India’s economic growth it is important for us to use this prize not just for celebration but to harness the best of science and careful reasoning to policymaking.