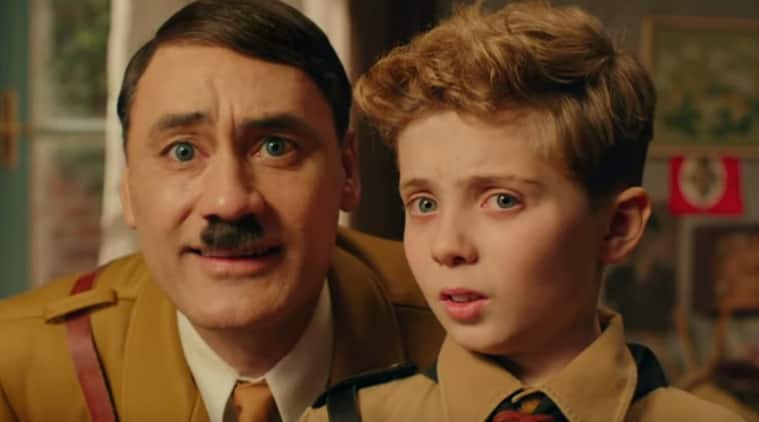 Jojo Rabbit has been helmed by Taika Waititi.

Jojo Rabbit, which won the Oscar for Best Adapted Screenplay and was nominated for Best Picture, paints a striking view of our times, though it is set in Nazi Germany towards the end of Second World War. Jojo Beltzer, a boy of 10, is brainwashed to believe that all Jews are evil, devil-like creatures, and are against Germany and “the Aryan” people. Not surprisingly, Jojo – who attends “Nazi summer camps” — accepts this view easily. He has been born and brought up in a totalitarian regime, and a version of Hitler is his imaginary friend.

The human mind is a malleable entity. It is easy to mould it to identity with a particular worldview, especially in the early phase of our lives. So many of us still believe the little superstitions that were passed on to us in our childhood. For example, “Don’t cross the road if a black cat cuts your path”. Such beliefs have no logical or scientific basis. But we hold on to them, in all likelihood because they became a part of our psyche when we were at our most impressionable.

Superstitions, of course, are often harmless. But there are some seeds that are sown in our minds during our childhood that become trees and loom large. And these trees are very hard to cut. Some of us were told as children that “Muslims are ruthless non-vegetarians” or “they hate us”. These ideas, over time, can shape how we see people and place certain pre-conceived notions about a community in our minds. Much like Jojo, we end up de-humanising those we do not know.

Jojo Rabbit is the story of a 10-year-old boy who admires Adolf Hitler.

But things change for Jojo, as they do for many of us. He encounters a Jewish person, realises that things he was told were not true. That the friend he makes is as human as he is.

The main theme of Jojo Rabbit, I think, is the devastating effects of false propaganda. The Holocaust, soldiers killing each other — all the outcome of a lie. Jojo is a child, influenced by a state’s lies. But sooner or later, the truth does come out. And when it does, he realises how wrong he was.

Jojo sees the truth through, Elsa, a young Jewish woman who his mother is hiding in their home. In each of our homes too, in our minds, there is a corner where an Elsa stays. Sometimes, we can’t see that corner because of blind faith and ignorance. But when we do, we come face to face with the reality of who we are. As Elsa says to Jojo: “You are not a Nazi, Jojo. You are just a 10-year-old kid who likes to dress up in a fancy uniform and wants to be part of a club.” Sometimes, I think that’s what so many of us are.

States and political parties use their power to spread a particular type of propaganda. This is also used as a distraction, to lead the public away from the main issues that concern them. False information is so easy to spread in these times. What about the credibility of that source? Alas, not many people give much thought to that. Social media armies, and click bait on the internet lure the user in. Tweet after tweet, snap after snap.

Jojo Rabbit is a striking account of the game which some people play in the name of nationalism and which leads to the destruction of countries and cultures. We must understand the difference now. Between truth and lies. Between what we are and what we may become. Between false nationalism and a genuine love for our country. We don’t want to be part of a story where, at the end of it all, we realise that what we were fighting for were lies.

The writer, 18, is a pursuing a bachelors’ degree in Physics in JECRC University, Jaipur

World Is Not A Village