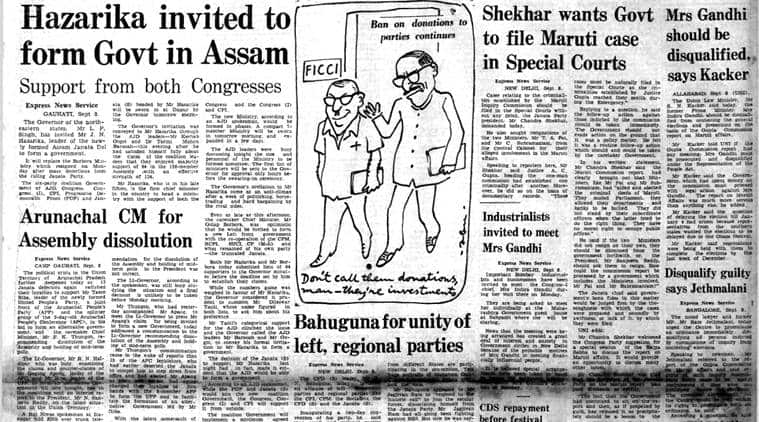 The governor of the northeastern states, L P Singh, has invited J N Hazarika, leader of the newly-formed Assam Janata Dal, to form a government. It will replace the Borbora Ministry, which resigned on Monday after mass desertions from the ruling Janata Party. The six-party coalition government of AJD, Congress, Congress (I), CPI, Progressive Democratic Front (PDF) and Janata (S) headed by Hazarika, will be sworn in at Dispur by the governor.

Naming of an ethnic Tibetan as head of the regional government of Tibet appears to be largely a cosmetic shift in Chinese policy, albeit a significant indicator of Peking’s new liberalising attitude toward its so-called “national minorities”. Tian Bao (Tien Pao), a 62-year-old Tibetan, reared in a lammaist monastery who joined the struggling army of Mao Tse-tung during the Long March of 1935 as an 18-year-old soldier, was named chairman of a new “people’s government” during a regional people’s congress in August. Tibet is one of the first of China’s 29 provinces and autonomus regions to name a new style of people’s government to replace the revolutionary committees set up in the wake of the cultural revolution.

The political crisis in the Union Territory of Arunachal Pradesh has further deepened. Thirteen Janata defectors again switched their loyalties to support Tamo Biba, leader of the newly formed United People’s Party — a joint front of the Arunachal People’s Party (APP) and the splinter group of the two-day-old Arunachal People’s Conference (APC) — in his bid to form an alternative government.Rhe caretaker chief minister, P K Thungon, recommended the dissolution of the Assembly and holding of mid-term polls. Lt Governor R N Haldipur has sent an interim report to President N Sanjeeva Reddy on the latest situation in the Union Territory.