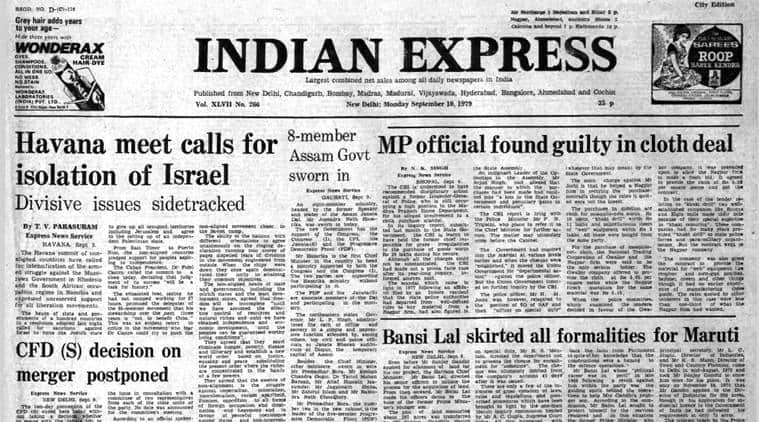 Janata Party leader, Jagjivan Ram, said today that democracy was in greater danger now than ever before. Addressing a largely attended Harijan rally at Ajmal Khan Park, Ram said he had full confidence in the people who, in the 1977 Lok Sabha elections, revived democracy while democracy was breathing its last. He said democracy was in danger now because of the twin forces of dictatorship represented by Mrs Gandhi and facism represented by Charan Singh. Amidst applause from the crowd, Ram declared that in the next elections the Janata Party would win with a greater majority. He said the party’s opponents were already panicking.

The Gupta Commission has revealed that over the years, the Punjab National Bank and the Central Bank of India advanced Rs 90 lakh and Rs 22 lakh respectively to Maruti Limited in violation of all norms and procedures – most of which were repeatedly changed whenever Sanjay Gandhi wanted them to be changed. The rate of interest was lowered when he asked for it. At one turn after another, the company exceeded the authorised credit limits. At no stage did either of the banks make any appraisal of the credit requirements or the feasibility of the project that was undertaken by Maruti Limited. And, at no stage did Maruti give a list of the items it was hypothecating in return for the loans.

The Havana summit of non-aligned countries have called for intensification of the armed struggle against the Muzorewa government in Rhodesia and the South African occupation regime in Namibia. and expressed unreserved support for all liberation movements. The heads of state and governments of a hundred countries, in a resolution adopted last night, called for sanctions against Israel to force the Jewish state to give up all occupied territories including Jerusalem and agree to the setting up of an independent Palestinian state.