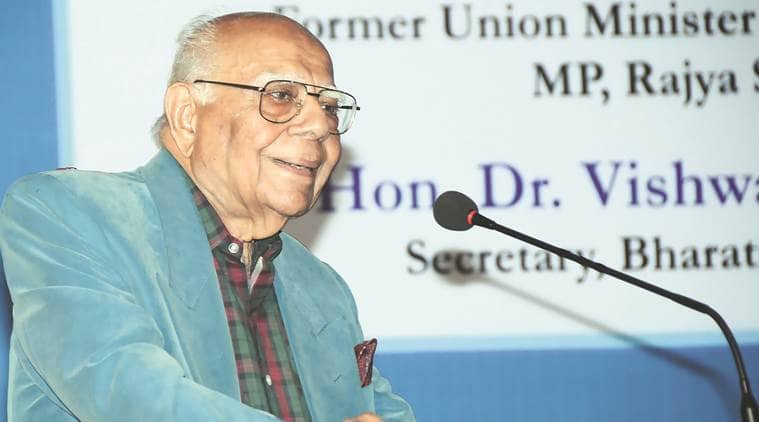 My nonagenarian friend Ram Jethmalani has passed into life hereafter. We had known each other for over four decades and had very different views on many matters of national importance. At academic seminars, meetings and workshops we differed — always in a highly civilised manner — on nuances of legal issues, especially those with political overtones. These interactions usually ended with an agreement to disagree.

I had my first academic encounter with Ram in 1977 at a family law conference I was compering. Zealously supporting the demand for implementing the constitutional provision relating to the uniform civil code, he concluded his presentation with the argument that minorities should accept the demand “as a price for living in this country.” Before inviting the next presenter, I confronted him by asserting that minorities were not just “living” in this country, they were its equal citizens, entitled to all the fundamental rights enshrined in the Constitution. Realising his impropriety, Ram returned to the podium to explain that he wanted to say minorities should accept the uniform civil code as part of their duty to respect constitutional ideals. Seven years later in October 1985, he and I had a dialogue in the columns of The Indian Express, on the issue of uniform civil code.

In 1999, when I was Chair of the National Minorities Commission, Prime Minister Atal Bihari Vajpayee named him as the law ninister. Ram soon icked up a bone with Chief Justice AS Anand, my old friend and classmate in Lucknow, and quit his job. Unable to decide who to support, I kept mum.

Ram began his legal practice in Karachi with the city’s leading lawyer Allah Baksh Brohi who, like him, was destined to be his country’s law minister. After moving to India, he taught law at a Bombay college. Later, he shifted to Delhi and served four times as the Chair of the Bar Council of India. During the dark days of Emergency, Ram shot into fame for his criticism of the mighty PM of the day. He entered politics soon after. In 2004, Ram contested the parliamentary election from Lucknow to oppose Prime Minister Vajpayee, and lost.

In the legal profession, Ram earned fame for defending all sorts of people — politicians, scamsters, alleged criminals and many others. His clients included navy commander K M Nanavati, BJP stalwart L K Advani, yoga guru Baba Ramdev, Andhra Pradesh’s Y S Jaganmohan Reddy, Bihar’s Lalu Prasad, stockbrokers Harshad Mehta and Ketan Parekh, mafia leader Haji Mastan, Kashmiri separatist Afzal Guru, and even former Prime Minister Rajiv Gandhi’s killers. Ram once said: “I decide according to my conscience who to defend. A lawyer who refuses to defend a person on the ground that people believe him to be guilty is himself guilty of professional misconduct”. I often advised students seeking admission to the PhD programme under my guidance to take up research on his briefs, but they were overawed both by his legal acumen and the nature of cases he handled.

In 2013, Amity University conferred on Ram an LLD degree honoris causa. The university’s Founder-President Ashok Chauhan concluded the valedictory speech with the words: “We pray that he lives for another hundred years.” Ram instantly retorted, “God listens only to reasonable prayers”.

For those interested in hearing from the horse’s mouth the story of Ram’s successes and failures, he has left behind two books, which are partly in the nature of memoirs. The first of these, curiously titled Conscience of a Maverick, was published in 2007. Seven years later, to counter criticism, he wrote another book, Maverick Unchanged, Unrepentant. Its blurb spoke of an undeniable truth about the author’s personality: “Ram Jethmalani, respected and feared for his candour in matters political, remains an enigma to many. Controversy neither leaves him nor intimidates him.” Ram indeed remained enigmatic till the last breath of his life.

May his soul rest in peace.

This article first appeared in the print edition on September 10, 2019 under the title “My friend, Ram”. The writer is former Chairman, National Minorities Commission & Member, Law Commission of India.