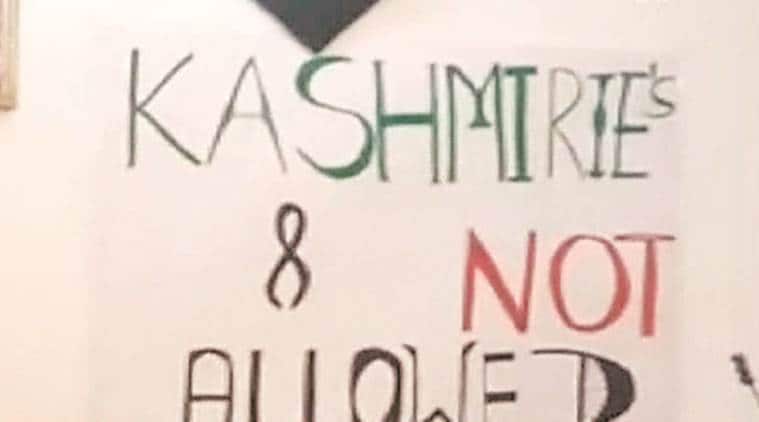 A hotel in Noida that put up a sign at the reception “Kashmiris not allowed” after the Pulwama terror attack was immediately dumped by their franchise partner, OYO Rooms. After terminating their contract and delisting the property from the hotel aggregating website, a spokesperson for the company said: “OYO is committed to bringing quality living experiences to our guests from around the world, irrespective of their race, religion, disability, sexual orientation, marital status, gender identity and age. We do not tolerate any form of discrimination at OYO.”

The owner of this property, Navnirman Seva Chief Amit Jani, remained adamant. “Some Kashmiris celebrated the attack. I have nothing to gain from this and I will incur losses,” said Jani, adding, “But nothing is above patriotism.” (The Indian Express, February 20, 2019.)

The wave of restless nationalist hysteria sweeping India after Pulwama has emboldened those with an inherently communal mindset, who need no longer have any qualms about flaunting such unrepentant discrimination. It’s why OYO’s swift response condemning this person by refusing to do business with him is so significant. When the national discourse seems contemptuous of facts and millions of vulnerable citizens have become victims of jingoistic propaganda, OYOs’ steadfastly hanging on to their values is a deeply political act. And probably, in the long run, a great PR move. There is a critical mass of well-heeled Indians who form the target audience for real estate, travel and entertainment businesses who care more about leading meaningful lives than wasting time on petty caste politics. Any enterprise dependent on millennials, certainly an OYO, cannot be seen as adhering to the bizarre ethos of a racist associate, who thinks it’s okay to punish an entire community for the terror caused by a misguided few.

Perhaps, all that making the world a better place involves, is not falling for the illusion that anything we do matters, but doing what’s right anyway. The biggest problems usually don’t have solutions and as the notoriously pessimistic French philosopher Blaise Pascal noted three centuries ago, man’s greatness comes from knowing he is permanently wretched. Occasionally though, there are triggers that build up over time that shatter the prevailing reality. For example, the most hotly debated issue lately, sexual harassment, has completely discombobulated corporate culture everywhere in the world. Just like how sexual harassment is now considered unacceptable, similarly, companies have an ethical obligation to take a stand like OYO did when people behave cruelly and so casually violate somebody’s
basic rights.

It would be indulging in magical thinking to hope that OYO’s stance will greatly influence corporates to follow zero tolerance HR polices against bigotry. It is worth noting that before candlelight vigils and writing cheques for relief funds became the showcase for woke citizens, India had a glorious history of effectively using non-violent means to effect change. Millions of people joined the freedom movement for the first time when Mahatma Gandhi broke the British Raj’s salt laws in 1930 and civil disobedience changed world attitudes towards India’s wish for self rule. Right now, for the second time in a year, thousands of farmers are walking 180 km from Nashik to Mumbai to
protest BJP policies. It is difficult not to feel a sense of solidarity with them and this symbolic walk of grave impoverishment. Similarly, a social boycott and peaceful ostracising of the practitioners of hatred — at an individual and company level — one can only hope will spur people to behave more kindly towards their fellow citizens.