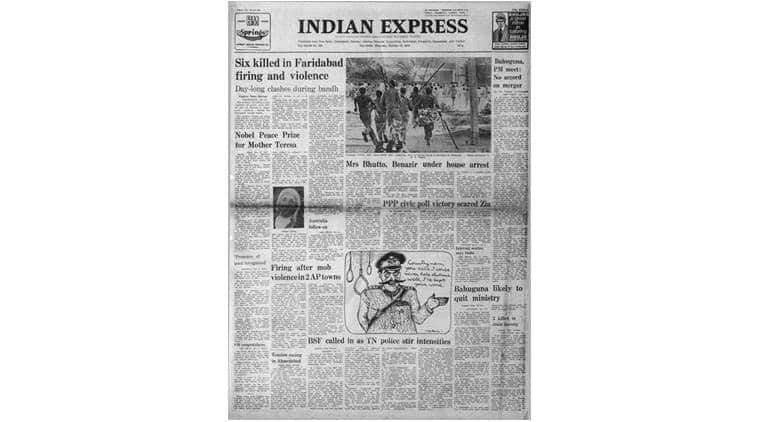 Mother Teresa, Calcutta’s “Saint of the Gutters,” was awarded the 1979 Nobel peace prize for her work among the poor of India. The Yugoslavia-born Roman Catholic nun is the sixth woman to win the prize. The Norwegian Nobel committee said Mother Teresa was given the prize “in recognition of her work in bringing help to suffering humanity”. In 1947, Mother Teresa- moved into Calcutta’s slums “to serve God among the poorest of the poor’. The order she founded, the Missionaries of Charity, is best known for its “Home for the Destitute Dying” which opened in Calcutta in 1952. She is the first Indian citizen to win the peace prize since it was instituted in 1901.

In Islamabad, authorities placed several political leaders under house arrest early on Wednesday following President General Zia-ul-Haq’s order banning political parties and putting off national elections indefinitely. Official sources said the heads of most of the parties and other leaders were ordered detained in their homes for three months. There was no official explanation for the action, but observers said its purpose was to stifle political activity. The offices of all the parties, including their branches in various cities, have been sealed by the government.

Services of the Border Security Force (BSF) have been requisitioned by the Tamil Nadu government as the agitation by a section of Tamil Nadu policemen intensified. It is learnt that the BSF battalions are to move in tonight. The number of battalions sought had not been disclosed, but police sources said that the strength would be “adequate”. The ultimatum issued by the Director-General of Police, E L Stracey, that the striking policemen should withdraw their stir and resume duty has had little effect. On the contrary, the agitation, which was limited to Madurai and Coimbatore districts initially, has since spread to five other nearby districts.

India-China: No conceivable solution, we must defend our people as much as territory