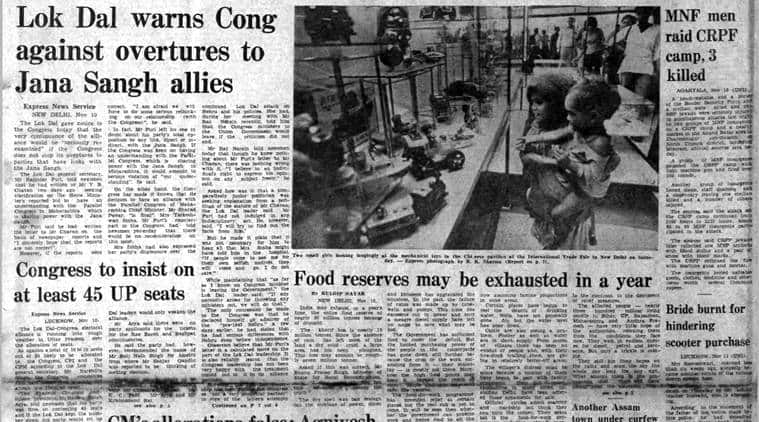 India may exhaust in a year’s time the entire food reserve of nearly 20 million tonne because of drought. The kharif loss is nearly 12 million tonne. Since the absence of rain has left most of the land a dry solid crust, a large area has not been ploughed. This loss may amount to roughly seven million tonne. The dry spell was bad enough, but the shortage of power, diesel and kerosene has aggravated the situation. In the past, the failure of rains was made up by tubewells and pumps. This time the excessive cut in power and the meagre diesel supply have left no scope to save what may lie lost.

The Lok Dal gave notice to the Congcess that the continuance of the alliance would be “seriously reexamined” if the Congress does not stop its overtures to parties that have links with the Jana Sangh. Lok Dal general secretary, Rajinder Puri, told newsmen that he had written to Y B Chavan two days ago seeking clarification on the home minister’s reported bid to have an understanding with the parallel Congress in Maharashtra which is sharing power with the Jana Sangh. Puri said he had written the letter on the basis of newspaper reports and, if the reports were correct, “I am afraid we will have to do some serious rethinking on our relationship (with the Congress).”

One group of Teheran diolomats visited hostages at the US embassy on Saturday and another called on Iran’s acting foreign minister to demand an end to the embassy standoff, it was reported. But Ayatollah Khomeini went into seclusion, apparently dashing hopes for face-to-face talks and a resolution of the crisis, AP reports. The government-run Teheran Radio said that Khomeini would not receive anyone on Saturday or Sunday — observers felt it meant discussion of the fate of the hostages was postponed until Monday.

PUBG Mobile update 0.19.0 with Livik map to launch on July 7

WATCH: Never seen before footage of Mars' crater which can be a source of water

Krishna, Who's Missing The Beach, Shares A Stunning Pic With Boyfriend