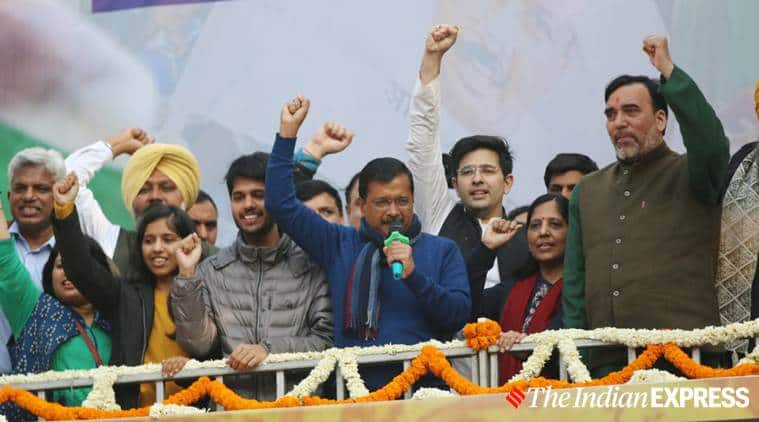 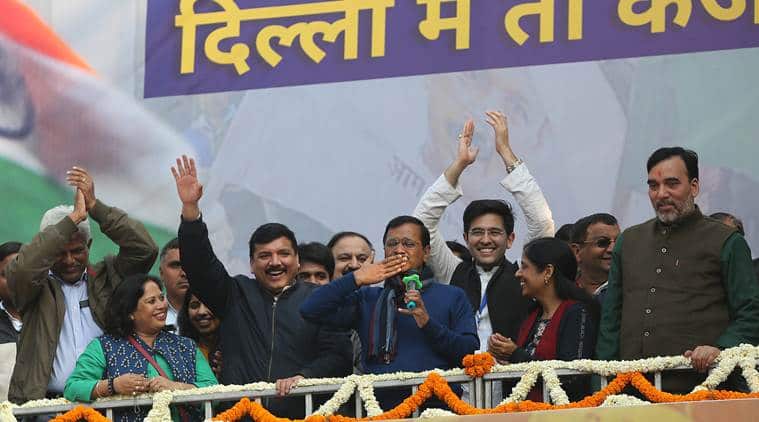 Delhi Chief Minister Arvind Kejriwal with his family and party leaders at the AAP headquarters in New Delhi. (Express photo by Tashi Tobgyal)

The crucial moment of the Delhi results came when Arvind Kejriwal led the crowd in calling out ‘Bharat Mata ki Jai’, ‘Inquilab Zindabad’ and ‘Vande Mataram’. He made it clear that Hinduism is not the personal property of the BJP. He ran an astute campaign which did not allow the BJP to distract voters from the solid achievements of the Aam Aadmi Party in delivering public services. He did not fight PM Narendra Modi on the Citizenship (Amendment) Act, and treated it as irrelevant for Delhi polls.

This is the new articulate resistance to the BJP’s drive for a Hindu nation. The many demonstrations across India against the CAA are draping themselves in the National Flag. Hindus and Muslims are asserting their common nationality by reciting the Preamble to the Constitution. This is not the old Jawaharlal Nehru University demonstration for Afzal Guru, where slogans were allegedly raised of tukde tukde. This is India United.

The Congress was bequeathed secularism by Jawaharlal Nehru. Few Congress members understood or liked it. Their private lives were drenched in their religious beliefs though officially they parroted secularism. Subsequent generations of the Nehru-Gandhi family never quite understood the idea and reduced it to a cynical vote bank ploy. Faced with the BJP’s criticism that it was pro-Muslim, the Congress panicked and abandoned secularism. Then in an extreme gesture, Rahul Gandhi boasted of his Brahmin credentials and indulged in showy temple visits. It did not help because its insincerity was transparent.

There is no reason why any politician should not openly assert that S/He is a Hindu or a Muslim and Indian. (Somehow the Sikhs have never been troubled asserting their religious identity nor the Christians.) To be embarrassed about your religious identity is to abandon secularism, not assert it. Secularism has never meant atheism for Indians, as it has in the West. This is why Kejriwal’s gesture is a game changer. From here on, display of religiosity is not one party’s monopoly. It is a common property of all and should have no political purchase.

Uddhav Thackeray has already challenged the BJP’s monopoly of Hindutva since he became the Chief Minister of Maharashtra. This is a lesson other regional leaders will soon pick up. Indians are intensely religious in their daily lives. It was perhaps only a small westernised, anglophone elite who was confused about secularism being anti-religion. Nehru had no religious beliefs that he ever displayed. But that was never meant to be for everyone. For Nehru, secularism was a message to orthodox Hindus in the Congress to respect the Muslims who had chosen India.

The BJP has now lost four state elections since winning the general election. In all four it played the national card of aggressive assertion of Hindu nationalism and marginalisation of Muslim identity, especially in Kashmir. It passed the CAA ostensibly to highlight its rejection of Muslim refugees from Muslim-majority neighbouring nations as potential Indian citizens. Voters have shown they don’t care. They want economic prosperity, good services and welfare delivery.

The BJP delivered these during 2014-19. Can it now get back to the old agenda?