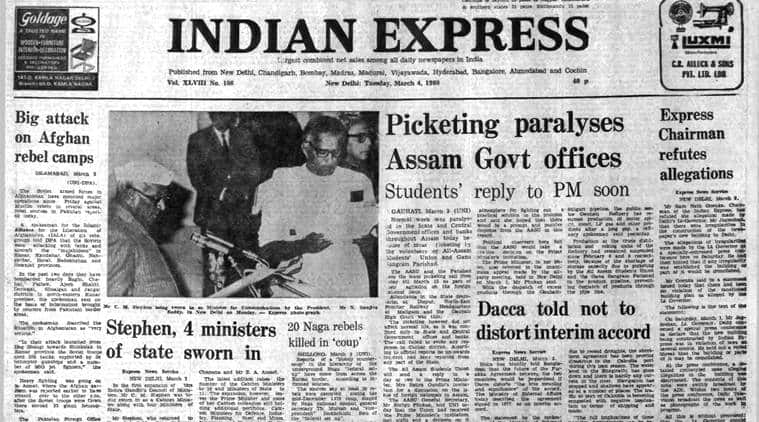 This is the front page of The Indian Express published on March 4, 1980.

Reports of a “bloody counter-coup” in the hierarchy of the underground Naga “federal setup” have come from across the Burma border. According to sources, at least 20 rebels were executed during the mid-December 1979 coup, staged by Naga National Council general secretary Thuingaleng Muivah and vice president Isak Chishi Swu. The two who were put under house arrest about two years ago after a bloodless coup, managed to stage the counter-coup reportedly in collaboration with S S Khaplang, president of the underground “government”, located in Burma.

Prime Minister Indira Gandhi, in an interview, likened the Soviet intervention in Afghanistan to US actions in South America. “The Soviet Union could not stand by and without reacting at a moment when it saw its national interests at stake,” she told the Paris daily Le Matin. While not trying “to excuse or whitewash” the Soviet action, she said Afghanistan was on the Soviet border, and with Afghan rebels being armed by Western-backed Pakistan, “what alternative did the Soviets have?”

The All Assam Students’ Union general secretary, Bhrigu Phukan said the Union had received the prime minister’s invitation for a discussion on the foreign nationals issue. A decision on it would be taken at the executive meeting.