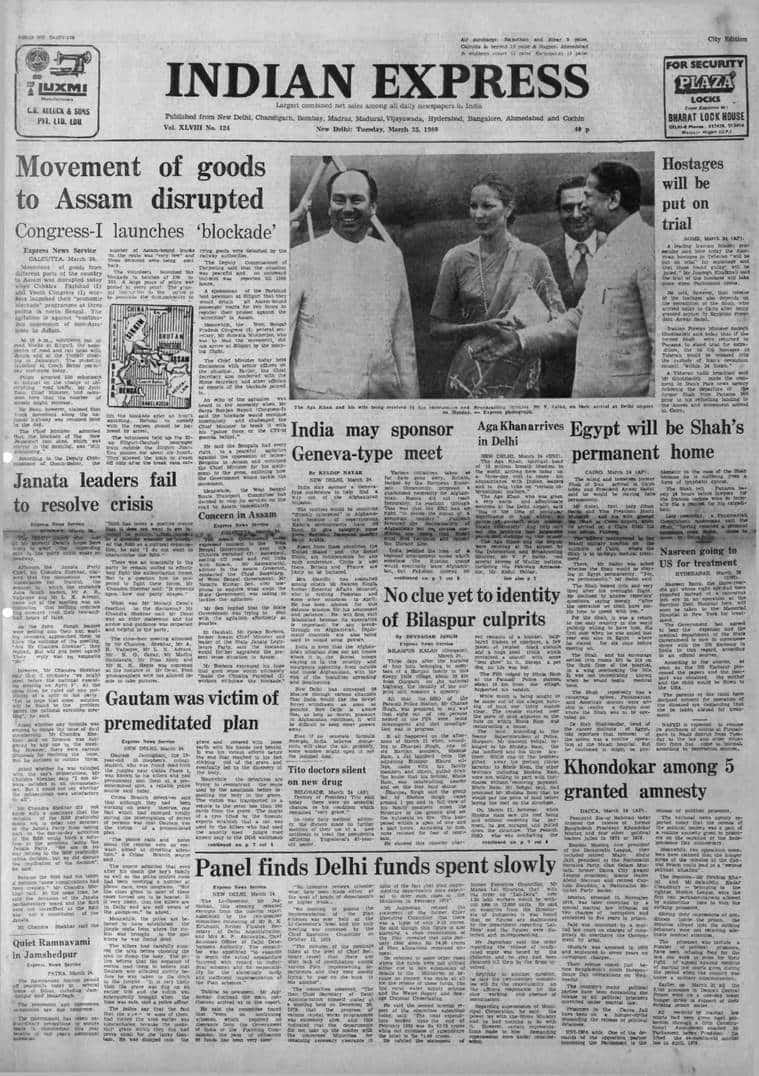 This is the front page of The Indian Express published on March 25, 1980, Forty Years Ago.

Movement of goods from different parts of the country to Assam was disrupted when Chhatra Parishad (I) and Youth Congress (I) workers launched their “economic blockade” programme at three points in north Bengal. The agitation is against “continuous oppression of non-Assamese in Assam”. At 10 am, volunteers put up road blocks at Siliguri, the nerve centre of road and rail links with Assam and at the Tinbati crossing in Jalpaiguri. The picketing launched at Cooch Behar continued. Police arrested 500 volunteers at Siliguri on the charge of obstructing road traffic. Chief Minister Jyoti Basu told newsmen in Calcutta that the number of arrests might increase. Basu, however, claimed that truck movement along the national highway was resumed later in the day.

India may sponsor a Geneva-type conference to help find a way out of the Afghanistan impasse. The invitees would be countries “directly interested” in Afghanistan because of repercussions Kabul’s developments have on them. In this category come India, Pakistan, Iran and possibly Saudi Arabia. Apart from these countries, the United States and the Soviet Union are indispensable for any such conference. China is also there, and Britain and France are likely to be included. Mrs Gandhi has consulted among others Swaran Singh, the former external affairs minister, who is visiting Pakistan and some other countries in April.

The ailing and homeless former Shah of Iran arrived in Cairo. President Anwar Sadat said he would be staying here permanently. Sadat, first lady of Jihan Sadat, and Vice President Hosni Mobarak and his wife greeted the Shah at Cairo airport when he arrived on a flight from his last refuge Panama. For the Shah it was a return to the only country in the world publicly willing to have him.