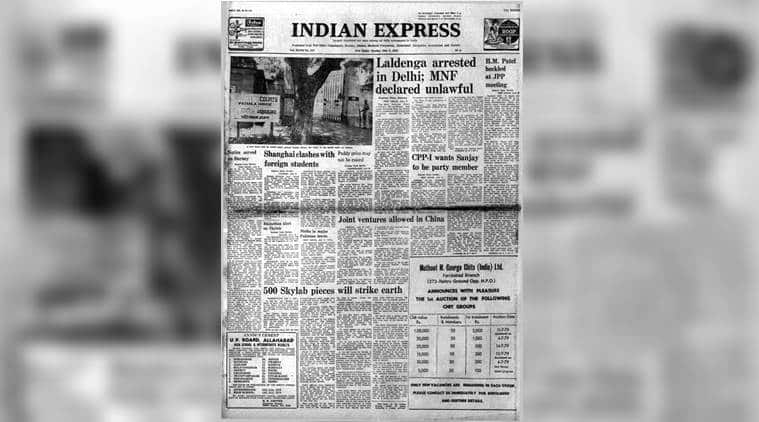 The Mizo National Front President, Laldenga, was arrested from his South Delhi residence and remanded to police custody for three days. The government, through a notification issued last night in the gazette extraordinary has meanwhile declared the Mizo National Front and its allied organisations — including the Mizo National Army — unlawful associations under the Unlawful Activities (Prevention) Act, 1967. The deputy commisisoner of police, South Delhi, K K Paul, told ENS that Laldenga was arrested on charges of conspiracy, sedition and insurgency under Sections 120 B, 124 and 126 of the Indian Penal Code.

Sixteen Africans and Arabs were injured, four of them seriously, in violent scuffles between students of third world countries and Chinese students at the Textile Institute in Shanghai, from July 3 to 5, according to BBC. Following the incidents, the foreign student community has decided to go on a strike, and the atmosphere is tense in Shanghai. The incident started when some African students playing loud music on the night of July 3, were called “Black devils” by the Chinese, according to the students. It was the second time this year that quarrels broke out between Chinese and foreign students.

At 160 km up, Skylab will begin to glow, the first sign that it has begun its fiery death dive into earth’s thickening atmosphere. At 110 km it will begin to break apart. NASA says the space station’s much-heralded and discussed return to our planet will happen this week, probably on Wednesday. First to rip away will be four windmill-shaped solar wings atop a telescope mount, followed by a single large solar panel on the side of the craft. Then, streaming flames like a meteor, Skylab will lose its telescope mount at 96 km. Next to fall away will be a section containing a control centre and a spaceship docking port.