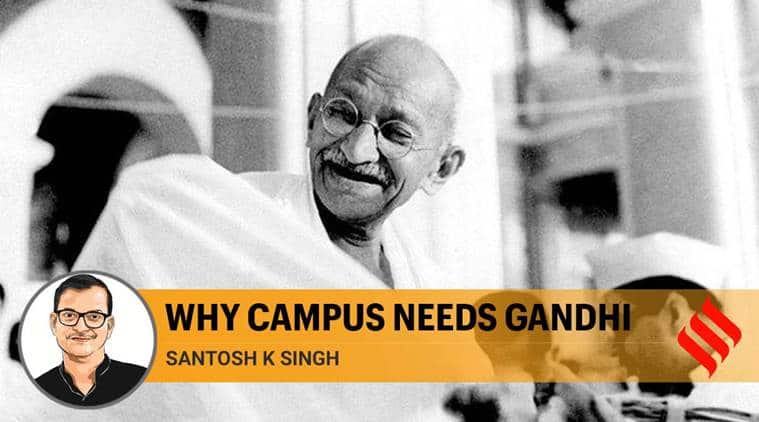 This moral courage and conviction can only come from the Gandhian philosophy of enemylessness.

It is ironic that at a time when we are celebrating Gandhi’s 150th birth anniversary, the campuses of higher education have witnessed an escalation of violence and conflicts. Gandhi, in particular, is immensely helpful in such a time of polarisation. Public spaces are painted in black and white, without a possibility of grey zones. The fine, sublime art of patient engagement and nuanced debate is not an option.

Gandhi was not about binaries. He was for the rural, but not against the urban. He was for the poor, but not against the rich. In Gandhi, there was no notion of an enemy or the other. He transcended these mundane binaries by taking a more universal-humanistic view of the pragmatic and egotist considerations of his time. Many think, for example, that Gandhi was against modern technology. That he extolled the virtues of “tradition”. This is where people miss the larger point. In Hind Swaraj, he does indeed argue against the dominance of technology. But that was not to dismiss the humane use of technology. He was critiquing the overbearing dominance of technology in organising human life, which would make humans slaves of technology.

Didn’t Gandhi use a watch to organise his day? If Gandhi had looked at a watch as the enemy, he would not have exhibited it so prominently. Did Gandhi use a bullock cart to travel to Champaran? No, on the contrary, in his life, train journeys occupy the status of historic milestones. Gandhi could live these apparent paradoxes precisely because of his “enemy-less” philosophy.

I believe it is this “enemylessness”of Gandhi that offers enormous possibilities for the teachers and the administrators in these turbulent times. A touch of forgiveness, a few gentle words of affection and empathy, and an undying belief in communication with compassion with the students can make a huge difference. Understandably, the landscape of a university campus is dotted with diverse ideologies and political philosophies. Like a student, a teacher too, for instance, may be a believer or an atheist. But as a teacher, one is not expected to indulge in any form of ideological untouchability. More importantly, one has to engage and reach out to those students who carry contrary opinions with warmth and gentleness and not with arrogant epistemic violence. “It is easy,” Gandhi once said, ‘to be friendly to one’s friends. But to befriend the one who regard himself as your enemy is the quintessence of true religion.” Students are students, irrespective of their location and politics. For a teacher, they ought to be equals. This is, however, easier said than done. Young people are restless, angry and sometimes impolite. They are under pressure of all kinds. The onus of guiding them is on the teachers.

It is important to engage with students in all circumstances. The worst is to act or even appear to be partisan. It helps to be endearing and friendly with those who do not agree with you. This moral courage and conviction can only come from the Gandhian philosophy of enemylessness. In this state, anger, hatred and hierarchy dissolve to create a more compassionate ecosystem of learning . Campuses should promote healthy discussions where dissent and dialogue ensure a space where the mind is without fear. Non-violent campuses are possible only when their stakeholders transcend the binaries, like Gandhi did all his life.

The writer is a sociologist with the Global Studies Programme, School of Global Affairs, Ambedkar University, Delhi