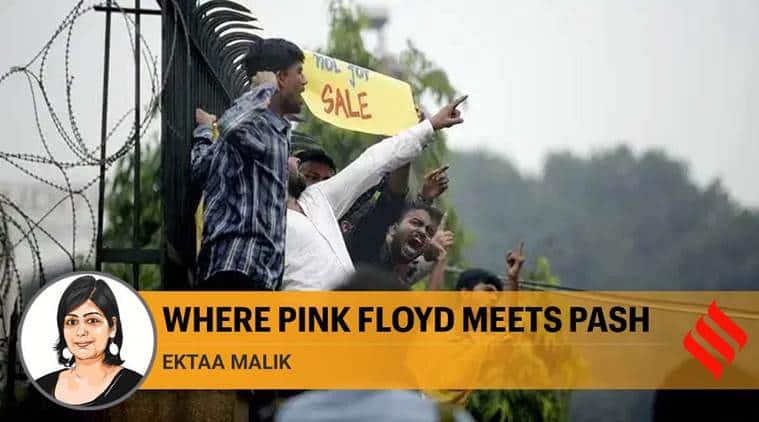 “We don’t need no education” was the first thing Parnal Chirmuley wrote on the blackboard in our first class. The famous lines from the Pink Floyd song made me chuckle. “Cool teacher,” I thought. But as I looked around, I realised that none of my 16 classmates in the BA(Hons) course registered the cool quotient, neither of the song nor the teacher. I rolled my eyes, happy in my bubble from a private school education and relative privilege. But three years later, as I passed out of JNU, I was aware not only of Pink Floyd, but of Pash, Brecht, Firaq Gorakhpuri and Namdeo Dhasal.

The sprawling JNU campus upended my life and all its trappings. This was the JNU of about 15 years ago. The majority of students were from small townships and rural areas. In the days before the internet exploded, and the time before the university became synonymous in the national imagination with “anti-national” sentiments, JNU’s popularity spread to the hinterland through sheer word of mouth. One distant cousin, one random school senior, or one small news clipping about its academic excellence sufficed to draw students from across the country, to get not just a degree but an education. This was a place where your Class 12 marks didn’t matter, nobody cared which school you came from. All that mattered was if you had a mind of your own, and were not afraid to speak it. “Talkative”, “hyper”, “distracted”, words used by teachers in school to describe me negatively, had the opposite effect on campus.

This is where I met people from Muzaffarpur, Supaul, Siwan and Warangal. Many of them depended heavily on the merit-cum-means scholarships provided by the university. Post the morning lectures, a horde of students would rush to the hostel mess, so as not to miss the day’s meal, as they could ill-afford even the modestly-priced offerings in the canteens.

Contrary to the perception that some have consistently sought to popularise, teachers and professors at JNU do not indoctrinate students with a Marxist ideology and Left philosophy. They do their job, and uphold the high standards of academic excellence that the university is known for. The real learning happens outside the classrooms, in the lawns, canteens, at the dhabas, where a constant exchange of ideas take place.

The hostels are not just halls of residence, they are what feed the academic schools. I lived for three years at the Chandrabhaga hostel with PhD scholars, MA/MPhil students and even shared my room with some of them. The daughter of a prominent Left leader lived next door but I was not aware of her lineage for the longest time. And on the other side resided a Sanskrit PhD scholar who spoke a dialect of Hindi I barely understood. She was from Gorakhpur, and kept to herself, but she always got mithai from home after Chhath Puja, which she distributed in the corridor. All three of us, and many more, stood in line everyday with our buckets at the geyser for hot water in the winter, and cribbed about the interminable wait.

Dinner time in the mess was always something to look forward to, the palak-dal notwithstanding. The rich pamphlet culture, which was thriving a decade ago, was literally food for thought. We chewed on the current political/social issues on campus, country and the world at large, as we made our peace with the aloo-variant subzi of the day. Often, the floors would be littered with pages, but would be cleaned post haste, as the mess was needed for a post dinner public meeting. It is at such a public meetings that we had the opportunity to listen to voices like Prakash and Brinda Karat, Sachin Pilot and Baba Ramdev.

JNU is often perceived as a bastion of the “elite liberal”, but the students protesting on the roads of Delhi are anything but elite. They are fighting for the spirit of the university, which enabled them to question, debate and discuss the status quo. A steep fee hike, for instance, will turn this egalitarian space into something like a private university — where people from the same economic and social background pontificate, secure in the knowledge that their worldview will not be challenged.

This article first appeared in the November 25 print edition under the title ‘Where Pink Floyd Meets Pash’. [email protected]