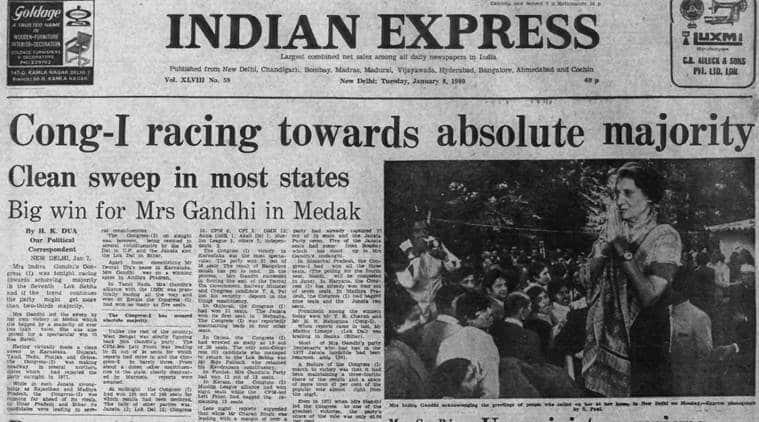 This is the front page of The Indian Express published on January 8, 1980.

Indira Gandhi’s Congress (I) was racing towards achieving majority in the Seventh Lok Sabha and if the trend continues the party might get more than two-thirds majority. Mrs Gandhi led the sweep by her own victory in Medak which she bagged by a majority of over two lakh votes. She was also poised for a spectacular win in Rae Bareli. Having virtually made a clean sweep in Karnataka, Gujarat, Tamil Nadu, Punjab and Orissa, the Congress (I) was making headway in several northern, states which had rejected the party in 1977. While in Janata strongholds in Rajasthan and Madhya Pradesh, the Congress (I) was far ahead of its rivals, its candidates were leading in several constituencies in UP and Bihar.

The Janata Party said it would be “wrong to assume that people of India have voted for erosion of their democratic rights although some people might be keen to make that assumption”. Talking to newsmen, the party general secretary, Surendra Mohan, said, “We trust that the people will not tolerate the erosion of freedoms. Freedom of organisation and freedom of the press are important and our party will not allow the people’s vigilance or its own to falter in defending them.” He said the “Janata Party accepts the verdict with all humility”. He added he had thought that it would be a positive vote for the Janata but had now found that it was a negative vote.

Swept off his feet by the Indira wave which swallowed all the 28 Lok Sabha seats in the state, Devaraj Urs tendered the resignation of his cabinet. Urs called on the governor, Govind Narain, at Raj Bhavan at 8:15 pm after a round of talks with some of his cabinet colleagues and handed over the resignation of his ministry to him. Three of his colleagues, H C Srikantiah, Chowda Reddy and S M Yahye have also resigned. The resignations of more ministers are to follow.