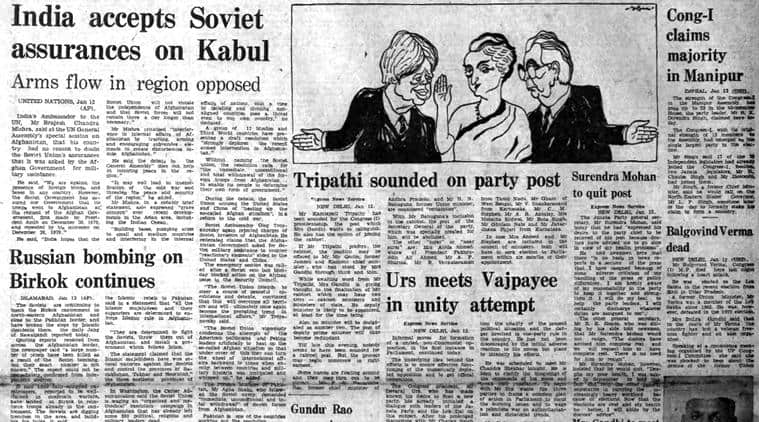 This is the front page of The Indian Express published on January 13, 1980.

India’s ambassador to the UN, Brajesh Chandra Mishra, said at the UN General Assembly’s special session on Afghanistan that his country had no reason to doubt the Soviet Union’s assurances that it was asked by the Afghan government for military assistance. He said, “We are against the presence of foreign troops and bases in any country. However, the Soviet government has assured our government that its troops went to Afghanistan at the request of the Afghan Government, first made by President Amin on December 28, 1979, and repeated by his successor on December 28, 1979.” He said, ‘‘India hopes that the Soviet Union will not violate the independence of Afghanistan and that Soviet forces will not remain there a day longer than necessary.”

Informal moves for the formation of a united, non-Communist opposition, in Parliament, continued. The underlying idea behind the efforts is to ensure effective functioning of the numerically depleted opposition and to get official recognition. Congress president Devaraj Urs, who has made known his desire to float a new party, has already initiated a dialogue with leaders of the Janata Party and the Lok Dal on this subject. After his prolonged discussions with Charan Singh, Urs had a meeting with the Janata leader Atal Bihari Vajpayee.