Inside Track: Congress in limbo 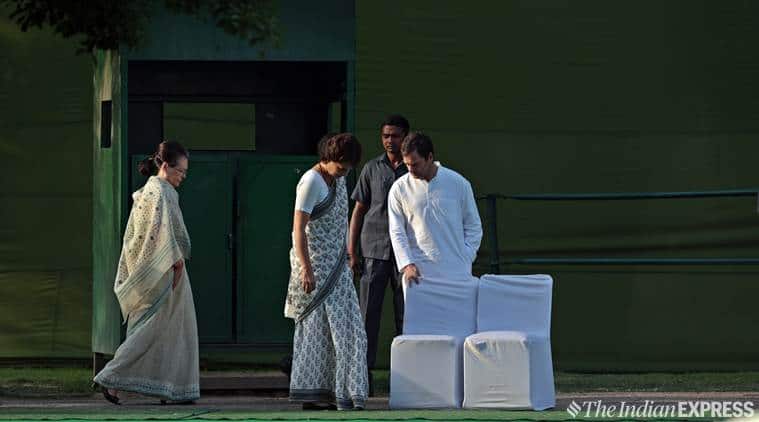 The Congress is in limbo with Rahul Gandhi remaining adamant that he will not continue as party president. A few alternative scenarios are being talked about. The old guard is pushing three names for president — Mallikarjun Kharge, Ashok Gehlot and Sushil Kumar Shinde — since they are considered loyalists and have the requisite experience. Kharge’s performance as the party’s leader in the previous Lok Sabha gives him an edge, particularly as he is from the south. Another proposal is for Manmohan Singh to be made party chief. His name has been floated by backers of Priyanka Gandhi Vadra, who want her to eventually take over the party. An alternative is that Sonia Gandhi becomes party chief temporarily. Meanwhile, there is a buzz in the Congress that someone close to the Gandhi family could jump ship. Adhir Ranjan Chowdhury’s appointment as Congress leader in the Lok Sabha has not been well received. No name has been announced as deputy leader in the Lok Sabha since Manish Tewari and Shashi Tharoor are most reluctant to work under him.

With opposition parties yet to recover from their devastating defeat, the mood is palpably glum in Parliament. Kapil Sibal, the Congress’s legal brain and the party’s in-house poet, has, however, not lost his equanimity. When asked if he had composed a poem to suit the occasion, he rattled off a verse: “Chal chod batein kal ki/Mat pooch kiski galti/Is mein milega na kuchch bhi/Har kadam pe kismat badalti (Forget yesterday’s events/Don’t ask whose fault it is/You will get nothing out of this/With each step, one’s fortunes keeps changing).”

A group of first-time YSR Congress MPs were noticed in Parliament’s Central Hall, intently studying portraits on the wall of some of the biggest names in Indian politics. They especially examined the placement of a recently installed portrait of Atal Bihari Vajpayee. The YSR Congress wants to put forward a demand that the portrait of the late Y S Rajasekhara Reddy, former Andhra Pradesh CM and father of party president and present CM Jaganmohan Reddy, be installed in Central Hall. The problem is that there is not an inch of space to accommodate another frame. Vajpayee’s portrait had been squeezed in with great difficulty. A friendly journalist suggested that the party should instead petition for a statue of YSR Reddy to be erected in the Parliament complex.

Trinamool leader Derek O’Brien is used to being the centre of attention in Delhi. But last week, first-time Trinamool MP Mahua Moitra stole the limelight. O’Brien tweeted and re-tweeted his speech in the Rajya Sabha but it was Moitra’s maiden speech in the Lok Sabha which grabbed all the attention . The former investment banker’s hard-hitting address on fascism was noticed and went viral on social media. Though he was not in the chair when Moitra spoke, the new Speaker, Om Birla, has been praised for letting first-time MPs speak at length. Among those to avail of the opportunity to make a maiden speech, this time in the Rajya Sabha, was K J Alphons, who was Minister of State for Culture and Tourism in the last government. But as minister, Alphons was never able to answer questions or make statements on behalf of his ministry due to continuous disruptions.

With S Jaishankar and Jugal Thakor filing their nominations for the two Gujarat Rajya Sabha seats, which have been vacant since the resignations of Amit Shah and Smriti Irani from the Upper House, Gujarat OBC leader Alpesh Thakor’s nose is slightly out of joint. Thakor, who heads a popular anti-prohibition movement and helped a resurgent Congress during the last Assembly polls, recently quit the party. It was expected that he would join the BJP and be suitably rewarded. Thakor, along with two other Congress MLAs, should normally have been disqualified for violating the anti-defection law by quitting the party. However, Gujarat Assembly Speaker Rajendra Trivedi of the BJP is yet to give his ruling.

Manmohan Singh’s Rajya Sabha term expired on June 14. The Congress had planned to bring back the former prime minister to the Upper House from Tamil Nadu. There are three vacancies from the state and the DMK is reportedly agreeable to offering its extra votes. But with the death last week of Rajya Sabha BJP MP Madan Lal Saini, the Congress does not require the DMK’s help. Singh can now be elected from Rajasthan.