History headline: Mirage-2000 to Rafale, the story in between 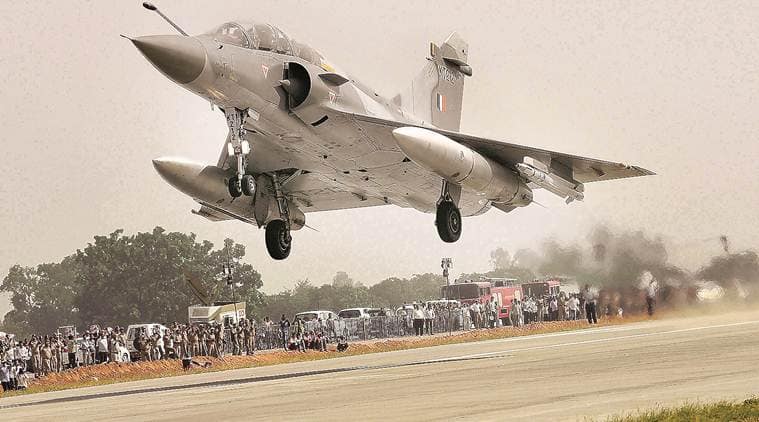 IN NOVEMBER 1980, a few of us were assembled under the leadership of then Air Commodore Prithi Singh, an experienced test pilot, and given some papers to study. These were about the Mirage-2000. We were to evaluate the aircraft in France as a possible counter to Pakistan’s F-16. At the time, we did not have any aircraft that could directly take on an F-16 in air. Soviets were far more secretive and offered the MIG-23MF which was no match against the highly manoeuvrable F-16. The MIG-29 was still unknown at the time.

We were pulled out from various places. I was then commanding a squadron and was chosen to be the team’s second test pilot. There were five engineers led by Group Captain I G Krishna. It was the first fly-by-wire combat aircraft, still in prototype stage, that the Indian Air Force would be exposed to. On December 8, 1980, Air Commodore Singh took the first flight and I flew the fifth Mirage-2000 prototype the next day. We flew a few more sorties, thereafter, covering supersonic speeds to very low-level flight over the sea. It was a remarkable aircraft as was the experience. The aircraft employed technology and concepts outclassing any other that we had experienced and brought a totally new dimension to prosecuting air war.

Last week, as Defence Minister Rajnath Singh took a sortie in a Rafale fighter aircraft after an official handover ceremony of the first jet acquired by the Indian Air Force, my mind went back to another aircraft from the Dassault stable, the Mirage-2000.

The first Mirage-2000 squadron was flown to Gwalior from France in June 1985 — of the 40 Mirage-2000s acquired by the IAF, 26 with the M53-5 engine were flown down. These engines were subsequently replaced by the more powerful P2. The RDM Radar that the aircraft had needed to undergo many improvements and software changes. The two squadrons flew a lot and became operational in record time. The aircraft proved highly reliable and the support from the French manufacturer was excellent.

Since induction, the capability of the fleet was continually improved. We managed to integrate excellent sensors, weapons and upgrade the avionics.

Two years later, in 1987, I was at the Air Headquarters as the head of Air Staff Requirement where one of my missions was to follow up on the Mirage-2000 fleet, and to focus on the development of LCA (Light Combat Aircraft) which was evolving with support from the designers of the Mirage-2000. Very soon, all hell broke loose. Many criticisms started appearing in news media. The Sunday Mail came out with an article on October 18, 1987, with the headline, ‘How the French Duped India’. It was nasty and incorrect.

The two Mirage squadrons were working continually towards improving their mission capability. They got operational on mid-air refuelling during day and night. They proved their worth in dramatic ways during the Kargil conflict and recently at the Balakot strike. With a very limited fleet of some 50 aircraft, they kept their lead, evolving tactics and strategy to combat enemy in the air as well to strike strategic targets.

Mirage-2000 systems and avionics became the examples to evolve those of LCA and for upgrading other fleets. TACDE (Tactics and Air Combat Development Establishment), the premier institution for evolving aerial warfare tactics, started working closely with the Mirage-2000 squadrons. The contribution of the Mirage-2000 to the IAF is enormous and it proved those who branded the aircraft as mere air show pieces as liars and venomous.

When we acquired the Mirage-2000 in 1982, there was an option to build 150 of these under license. The option was never exercised. It is a pity that in 2019, we target the LCA Mk-2 to have at least the same capability as that of the Mirage-2000. We could well have produced these at HAL under license.

In the ’90s, we acquired second hand MIG-21 Trainers to overcome shortage and we now plan to buy second hand MIG-29s. The MIG-29 is superb in its air superiority role but it does not have the same quality and versatility as that of the Mirage-2000. At the end of the day, the Air Force bears the responsibility and the bureaucracy exercises the power to say yes or no, while the government takes a distant stand.

It is time we get over our hang-ups and get more professional in what we do. The noise of politicising over every military acquisition is now deafening.

The writer is former Chief of Air Staff